People power vs CSG, the year in review 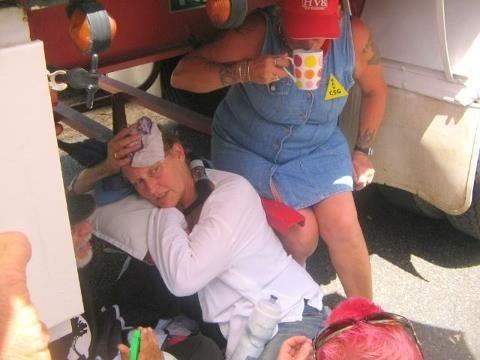 It’s been an amazing and empowering year in the fight against CSG in the Northern Rivers, and it seems the gas companies cant win a trick. They may have the ear of state politicians but they clearly don’t have the consent of the people.

The Glenugie blockade has stopped all work at the drilling site near Grafton for over a week,  and as a result drilling rigs and other equipment have been lying idle in the gas company’s compound at Casino. The success of the Glenugie blockade has surprised most participants and is evidence of the ever-growing nature and power of this organic social movement.  Whilst protest actions have grown steadily, attracting ever increasing local support, the shares of the locally contentious CSG company Metgasco have limped along at or near record lows. http://www.echonews.com.au/news/metgasco-shares-drop-as-protests-escalate/1657788/

The blockade has been attracting wide national and international attention and has been attracting a number of high profile visitors. Rumours about the impending arrival of a police task force coming to dismantle the blockade continue to circulate but whatever the outcome, the blockade has been an incredibly powerful display of people power and proof that wherever these companies go in the Northern Rivers there will be opposition by local communities. It isn’t the first community to stand up and it wont be the last. The companies and the state government may be able to tough out a blockade or two, but they will not be able to withstand sustained community opposition in the long term.

In response to the growing power of the movement, Metgasco and more recently the industry body APPEA  unleashed the old industry standard fall back plan of accusing protest movements of violence, but the claims have failed to really stick. The simple fact is that there is not a single instance that they can point to of anyone being charged with any violence related offences in this campaign so far. On the contrary the police have on several occasions complimented the movement on its restraint. There is ample evidence that the movement is deeply committed to non violence and has a long track record of providing non violence training to an otherwise angry and anxious public. http://www.csgfreenorthernrivers.org/?p=1542

Media attention has begun to turn on the issue of Metgasco’s share price, which has been staying flat near the record low it reached recently. A small but determined group of shareholders on the Hot Copper forum have been voiciferous in their denial that the sheer scale of this social movement is affecting investment, and quite reactive towards any contributors who suggest otherwise. But the facts are in the public domain for anyone who wants to see them. Check out the company’s  long term price chart (MEL) and compare it to the all ordinaries index at

Questions are now being raised about whether a company subjected to such overwhelming community opposition has an obligation to disclose such matters to the market. Looking at Metgasco’s history of ASX disclosures shows they do report on operational matters such as their seismic program and drilling contracts, yet there is scarcely ever any mention of the massive local opposition to be found in their public communications to the market. This is in stark contrast to the story they paint in local news media that portrays a social movement out of control. Several weeks ago the company proudly announced the contracts for drill rigs but have made no mention of the fact that the drill rig has been held idle in the company’s compound since the start of the latest round of the blockade. Whether these matters are mandatory to report is something that may be argued about but it will be very interesting to watch this space over the next few weeks.

What to expect next from an opponent in a corner?

With the share price flat, the opposition growing ever stronger and the tactic of trying to label the movement as violent falling flat on its face, one wonders where Metgasco intends to go next with its attempts to contain the public’s opposition. There’s been some not-so -subtle suggestions coming from some Metgasco supporters on the Hot Copper  forum of law suits against activists. Well there’s a tactic with a long track record of failure for companies fighting social movements.  SLAPP  suits (Strategic Litigation Against Public Participation) (http://www.sourcewatch.org/index.php?title=SLAPP%27s_in_Australia) are a well known device used by embattled businesses to try to intimidate and silence public interest activists. The Mclibel trials were a world famous example and a monumental public relations disaster for McDonalds. But probably most relevant and closer to home is the sorry history of the Gunn’s woodchipping company and its infamous Gunns 20 SLAPP suit that was a key part of that company’s inglorious demise. Hardly a story any company would want to emulate. http://www.themercury.com.au/article/2010/01/30/124821_todays-news.html

What begins as an attempt to intimidate opponents invariably leads to greater public scrutiny of the risks that activists are exposing and that companies try to suppress and of the desperation that leads companies to depart from their core business and enter into the murky world of SLAPP suits. Overnight new allies are drawn to the activists’ movement to support their right to free speech, social movements rally strongly behind the cause, social media goes berserk and companies find themselves picking up huge legal bills and dealing with the inevitable public relations disaster and recriminations from shareholders. http://users.senet.com.au/~gregogle/wallpaper.htm

An amazing year for people power

Its been an amazing year in the campaign against unconventional gas and in the Northern Rivers the public has been galvanizing more and more strongly in its opposition to this dirty and destructive industry. The historic Lismore poll, with its near consensus vote of 87% against CSG is now being replicated in surveys across the region in all local government areas. The first gasfield free community to witness the unwelcome incursion of the gas company at Glenugie near Grafton has well and truly proved its mettle and ignited public opposition to the industry throughout the Clarence. On Sunday 16 December over 600 people marched across the Grafton bridge in a show of solidarity in the ‘Walk against Gas’ whilst 100 others stood firmly at the blockade at Glenugie.

Other highlights of this amazing year have included  a staggering 7000 people marching in Lismore;  a massive proliferation of community groups formed to fight the good fight; new scientific evidence of massive methane leakage from gas fields threatening a carbon tax cost blowout for the industry (http://www.smh.com.au/environment/gas-body-fired-up-over-reports-of-methane-leaks-20121114-29ck7.html) and over 70 communities self declaring as gasfield free communities and gearing up to engage in mutual defence, as well as a string of highly successful community actions, protests and blockades ratcheting up the pressure.

The saddest part of the story has been the abject failure of our state politicians to sniff the wind on coal seam gas and respond with some reasonable policies. Nowhere in NSW is safe from this industry, and although the government is fond of blaming the previous labor government for the mess, the truth is that numerous expired mining  exploration licenses were unnecessarily extended by the O’Farrel government in September. But even amongst the pollies, the frayed nerves are showing with several state Liberal  and federal  labor MPs  publicly jumping off the cart and declaring their opposition to the industry recently.

Despite the political failure it seems that people power is showing its strength, communities are realising that direct action is the only way forward and in their wake investors are starting to vote with their wallets. https://aidanricketts.com/conflict-inevitable-as-gas-mining-is-forced-upon-unwilling-communities/

It’s been a big year and it promises to be a bigger year ahead in 2013. The best communities could do is heed the motto of the wartime Brits and “Keep calm and carry on”

Merry Xmas and a CSG free new year to all.