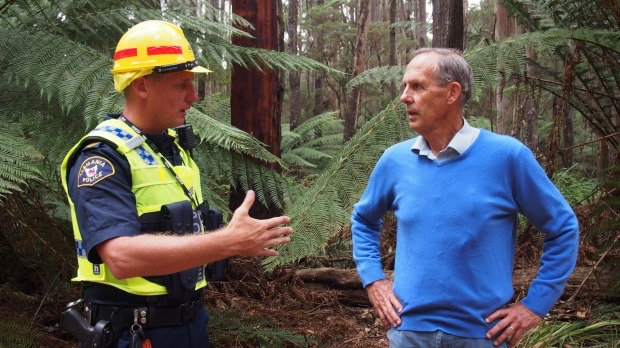 Former Australian Greens leader Bob Brown has launched a High Court challenge to Tasmania’s anti-protest laws – labelled “shocking” by a United Nations official – arguing that they breach the right to freedom of political communication implied in the Australian Constitution.

The case will likely be watched closely by other states, including the NSW Government, which is seeking to introduce similar anti-protest laws, and the West Australian government, which is expected to pass laws slammed by three separate United Nations Special Rapporteurs in coming weeks.

As Brown wrote for New Matilda at the time, he was arrested under the anti-protest laws for peacefully demonstrating against clear-fell logging of the Lapoinya Forest in January this year. He is due to face Hobart Magistrates Court for that act of civil disobedience tomorrow.

Challenging these same laws, Hobart solicitor Roland Browne filed a writ yesterday on behalf of the long-time environmental campaigner and former Greens leader and Tasmanian Senator. Conservative Premier Will Hodgman’s government, as the defendant, had a ‘notice of proceedings’ delivered to it this morning.

The laws passed through the Tasmanian Parliament in late 2014. They prohibit protests, whether on private or public property, that hinder access to business premises or disrupt business operations.

The bill furnishes police with extraordinary pre-emptive powers to ‘move-on’ a person they believe is about to commit an offence, and these powers extend to whole groups as well as individuals. It is then an offence to return to the area within four days.

The Act also empowers police to demand proof of identity, with protestors who fail to comply faced with a $2,000 on-the-spot fine. In addition, police can use “reasonable force” to move protestors on without requiring a warrant.

But if protestors challenge the fine they’re given, penalties can escalate drastically in court.

If a protestor chooses to have the matter heard as an indictable offence before a judge and jury, they can ultimately be faced with fines of $10,000 for individuals, or four years prison for a second offence. Organisations that commit the same crime can land themselves with a $100,000 bill.

The maximum penalties for protestors who choose to have their case heard summarily – or without a judge and jury – is lower, at $5,000 or 12 months in prison.

However the steepest penalties under the Act are reserved for protestors who are found by a judge and jury to have caused damage to a business: This can attract a fine of $50,000 or five years in prison.

The laws were even more severe when the Hodgman government first introduced them, but they were watered down as they passed through the Tasmanian Parliament, and after they were slammed by three United Nations Special Rapporteurs. One element of the legislation that was staunchly criticised, however, did make it into the Act.

The UN Special Rapporteur on Human Rights Defenders, Michel Forst said it is “shocking” that the laws “specifically target environmentalists” by singling out industries like forestry, agriculture and mining.

In his second reading speech, the Tasmanian Resources Minister Paul Harriss said “the central objective of the government is to ensure wealth creating businesses can develop and grow free from disruptive protest action that prevents them from operating on a normal commercial basis”.

The argument that will now be had in the High Court is whether that objective was carried out at the expense of civil rights, which the nation’s highest court has previously affirmed.

A person can only be found guilty of the principle offences under the Act if they fall within the definition of a protestor, which is defined by the legislation as someone who engages in an activity “for the purposes of promoting awareness of or support for an opinion, or belief, in respect of a political, environmental, social, cultural or economic issue”.

Ricketts ssaid that on his reading “this means that political communication itself has specifically been included as an essential element of the offence, or at least an essential precondition to the exercise of a power to give the person directions under the Act”.

In other words, you can only be found guilty under the act if the reason you breach it is because you’re promoting an opinion “in respect of a political, environmental, social, cultural or economic issue”.

“I find it very difficult to see how this is not, at its very core, a law that targets political communication itself,” Ricketts said. “The only remaining question for the Court would be whether it is a reasonably justifiable infringement of that implied freedom. I certainly don’t believe that it is,” he said.