The race to the bottom in Australian politics

On November 2, 2019 · Leave a Comment · In Commentary
Politics in Australia really has become a dismal tide. The last federal election saw a disunited LNP with no plan for climate change and almost no policies re-elected with a slim parliamentary majority. Anyone on the progressive side of politics was in shock for weeks afterwards. The election result was a shock, but the continuing tragedy is the ongoing failure of the Labor party to stump up and provide any meaningful opposition in the new term of parliament. 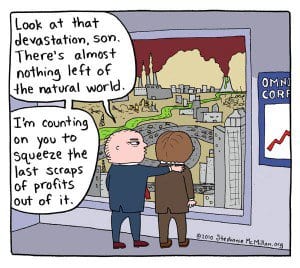 Labor had some good policies heading into the election, so it is an insult to the 49% of voters who voted for or preferenced Labor to see so many policies thrown overboard in the immediate wake of an election. Labor supporters often strut around on social media, dismissing minor parties with the retort “but Labor is a party of government’. That is all well and good if you happen to get into government, but if not your job is the be the actual parliamentary opposition and at this Labor are failing tragically.

The election was actually very close, and so the obvious implication is that Australia remains very divided on important issues, like the climate emergency, tax reform, social justice, human rights and environmental sustainability. Over the past several decades we have seen the Liberal and National parties lurch ever further to the loony right. Climate denial is all but entrenched as government policy, offshore detention centres are functioning concentration camps for the stateless, and totalitarian surveillance powers, restrictions on freedom of the press and anti-protests laws are heralding a serious decline into populist fascism.

There is a concept in politics known as the Overton window. It is the popularly perceived spectrum on which the general public assesses whether ideas are mainstream and ‘centrist’ or whether they are outlier or extreme. Once we understand the idea of the Overton window we can start to see how badly Labor has and continues to let down progressive politics in Australia, by capitulating to the governments legislative agenda.

Right wing firebrands like Hanson, Abbott and Dutton deliberately take on the role of pushing the window to the right by persistently normalising extreme reactionary and fear fuelled extremism. Activists, and minor parties like the Greens do their bit day in and day out to re-centre politics from those extremes by pushing new ideas from the progressive side of politics. Sometimes good policy can take several election cycles to break through. The Greens for example have persisted with policies like marriage equality, phasing out coal, euthanasia, medicinal cannabis, political donations reform, federal ICAC and drug decriminalisation, and bit by bit these ideas shift the Overton window and gain traction.

This is where Labor’s obsession with gaining power at the expense of providing principled opposition has become part of the problem. Chasing swinging voters through focus groups doesn’t help hold or shift the Overton window. Every time Labor votes with the government in contradiction to its own previously held policies, they allow the concept of the ‘middle ground’ to shift to the right. The result is an endless cycle of compromises and the dismal state of Australian politics.

Throughout the 1950’s and 1960’s Labor was in opposition federally but they maintained their principles and worked as an opposition and it was often said that they led policy from opposition as the government borrowed their policies to stay in power. They didn’t just give up on opposing the Vietnam war because they lost the election in 1966 and 1969.

Opposition is an important function and as it stands now only the cross bench in the lower house and the Greens in the Senate are providing meaningful opposition on a raft of important issues.

Just in a few short months we have seen Labor vote with the government to approve unjust and regressive tax cuts for the rich, anti-protests laws, and to approve the use of taxpayers money and legislation to keep coal fired power stations open even if the companies that own them want them closed. Labor is failing to provide opposition to the cash ban which threatens everyone’s personal and financial freedom, and provides no meaningful opposition to internet surveillance, or restrictions on press freedom. All of these issues have been left to the tiny crossbench to fight.

The problem with Labor’s approach is that if they keep doing it, they start each new electoral cycle from further behind. By supporting Scomo’s tax cuts, they have given the public the idea that regressive taxation enjoys bi-partisan support.

Should we believe that Labor would behave better in government than in opposition? Maybe not, just look to QLD where they are passing their own anti-protest laws from the government benches.

I’m sorry, I don’t hate Labor, I grew up within the Labor party, I joined when I turned 18, and even up to a few elections ago made donations equally to Greens and Labor at election time. I am a proud unionist as well. Something is deeply wrong, and I don’t mean to criticise the supporters and members, I am simply criticising what passes for political strategy.

It is tragic but Labor itself is becoming an impediment to progressive politics in this country by enabling the slide into right wing populism. In the state election last year, Labor seemed more determined to fight the Greens with negative mail outs in Lismore and Ballina than unite to fight against the Nationals.

There’s more to politics than gaining government, its also about defending good policy between elections, and holding your ground. Unless and until Labor becomes a real opposition, we will continue to see the slide to the right, resisted only by our brave activists, the Greens and cross bench politicians.

This is why the social movements that fight between elections need your support, from climate strikes to climate emergency, extinction rebellion, NEFA and more, we can’t rely on any of the big political parties we need to be active in our communities. And we need to put Labor to the test. Simply being ‘not as bad as the LNP’ is not enough, there is a need to stand up for good policy, between elections.