On January 21, 2022 · Leave a Comment · In Commentary
What a confusing ride it has been watching the familiar old political camps get upended during the pandemic. I think a lot of people have been left very confused about terms like ‘left wing’ and ‘right wing’ as the combination of pandemic anxieties, social media polarisation and the spread of conspiracy theories exposed some old cultural fault lines and created new ones.

Our old ideas of left and right had their hey day in nineteenth and twentieth century battles between socialists and capitalists, those in favour of wealth redistribution and those in favour of laissez faire trickle up economics.  The arguments still have some substance, but in the world of how people now identify politically the terrain has become far more complex.

It has become very confusing. We suddenly have wellness bloggers sharing white supremacist memes, long time hippy comrades sharing One Nation or Craig Kelly posts, we have fascists and neo Nazis in the streets of the big cities claiming to represent ‘freedom’ and ‘sovereign citizens’ waving naval flags.

We have seen violence at protests from both protesters and police, especially the Victorian police, and at times a failure by those of us who would normally be denounce violent policing, failing to do so because we don’t agree with the people they are capsicum-spraying this week.

Then there are the confusing debates around things like freedom of speech, a fundamentally important civil right for all people, but especially for minorities and social movements pursuing new cultural change. In the name of diversity, we sometimes get quite aggressive cancel culture, purity spirals and a celebration of ‘punching up’ against privilege. I’ve even seen people attacking David Attenborough as an eco-fascist simply because he dares suggest that human population threatens bio-diversity. I’ve even seen the great democracy activist and intellectual Noam Chomsky derided simply because he is a white male

It is no wonder we are feeling confused.

So, at risk of simplifying what really is quite complex I’m going to suggest we temporarily put aside ideas of left and right, (although I think ultimately they still have some value) and start to break this cookie apart from the four axes of authoritarian vs libertarian and community vs individualist.

So, to begin with, let’s remind ourselves where the global power really lies. Despite the pandemic, despite the conspiracy theories and despite who or what any of us identify as, the real power still lies in the hands of giant corporations globally. The Haliburtons, the Monsantos, the mining industry, big Pharma, corporate agribusiness, arms manufacturers, banks. These giant entities span the globe, dwarf most governments in their sheer economic size, and can resist individual governments and legislators who try to bring them under control. If corporations really remained separate of state power they would be a big enough problem but they have skilfully learned how to manipulate and control governments and political parties as well. Just look at the stranglehold the fossil fuel industry exerts over the LNP and Labor parties in Australia as a prime example.

I am not a great fan of models, as reality is always far more complex than any model, but any model that introduces more complexity is at least a bit helpful. You can have a play with this one, you don’t have to agree. 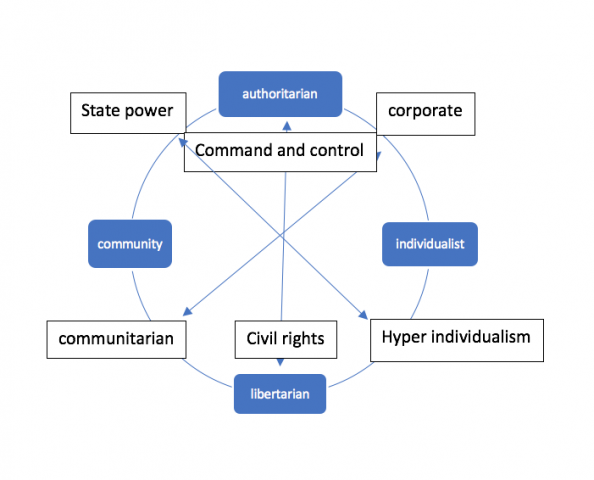 So, if you want to know where the real power lies, it lies towards the top right of the diagram. And the real power to resist lies with communitarian social action, from the bottom left.

The thing about the diagram is that at every point the counterpoint is diametrically opposed. So, if you want to know where the real locus of the fight against global corporate power lies, it is in the hands of communities, and democratic processes for expressing the needs and intentions of communities. Remember the fight against fracking in the Northern Rivers. We weren’t fighting amongst ourselves then, because as a community we had clear line of sight to where the problem was. It was the mining industry, the corporation and their backers in government. From this vantage, we the community were able to organise, rise up and ultimately prevail. The story is not always so triumphal as it was for us at Bentley, but the message is the same. Our power to resist the real power holders lies in community, in democratic participation, and if required in non-violent direct action.

It is fundamentally important to remember that real democratic reform is a bottom up process driven from communities that wins hearts and minds. It can be tempting for social reformers to try to grab the reigns of state power and start imposing their agendas on the population by force of law, but if you go down this path without first bringing the population with you, you are most likely to create an equal and opposite reaction.

Governments made this mistake during the pandemic by relying too much on state force and not enough on empowering communities, in things like lock downs and vaccination drives, and the resultant wave of resentment has been palpable.

We also see this dilemma for the social justice and green left, when they get a sniff of state power, there is often a temptation to ban things, to mandate things. If we allow ourselves to drift from a democratic communitarian perspective, and start to think we as a movement can start to pull the levers of state power, we run the risk of ascending from the bottom left of the circle towards the top left.  We already learned in the twentieth century the left and the  right can become similarly totalitarian when they try to enforce ideology.

As a deep green myself, but also a democratic communitarian I have often found myself arguing against banning things. Our real environmental enemies are the huge corporations, not the working class fishermen, the 4 wders, the campers. These people, whether we think they are doing harm or not, are part of our community and we need to win their hearts and minds. Similarly, if we care about animal rights, we need to win hearts and minds not generate resentment by seeing how many types of racing we can ban.

I sometimes feel as though the social justice and environmental movements have felt so disempowered at times that the focus for some has swung from the too-hard basket of fighting the real global corporate military power and has swung around to picking low hanging fruit in our communities to give ourselves the temporary satisfaction of an easy win. If we have banned someone’s recreation that we disagree with, if we have called someone a nasty name in a social media pile on, if we have played the game of pointing the finger of privilege at everyone around us. Did we really strike a blow for the global south, did we really challenge the warmongers, did we really disrupt the mining industry, or did we just make enemies from within our own communities?

And look at the backlash we are seeing on the opposite sides of the circle. The pandemic threw a stark spotlight on people’s individualism. But in that boiling cauldron of resentment we have some very shady neo-fascists deliberately harvesting widespread anger at political correctness and cancel culture, deliberately  appropriating important concepts like free speech, even the very concept of freedom.

Freedom and liberty are important, as is freedom of speech, but these things rightly belong to communities not just to individuals. They are the raw materials of democracy and participation in civil society.

The state is to an extent a necessary evil for a complex and highly populated world. We need good democratic governance from the state but we don’t need authoritarianism. When I see the Victorian police pepper spraying neo-fascists, sadly is see two types of fascism clashing (for now). I see the highly authoritarian tendencies of poorly constrained security forces and police playing with their anti-protest toys against the angry neo-fascist and anti-lockdown protesters. What we also saw on display was the danger of violent protest. Violence doesn’t win hearts and minds but it does help justify over-policing.

So where does all this leave us?

I think there is still a left and a right. The right still represents entrenched wealth and power globally and the left still represents real people and real communities, working together for a sustainable and equitable future.  We cannot achieve that by subdividing ourselves and grabbing for power over each other. We won’t get anywhere by  simply ‘punching up’ inside our own communities. We have much work to do to bring this planet back from the brink of climate and biodiversity collapse. We still have very big forces in the form of multinational corporations, totalitarian governments and their militaries, and now new problems, social media that uses algorithms to exacerbate social tensions and turn people against each other.

There is still massive global inequality and we do need to address this. There will still be a need for government, and even for increasing global state cooperation, this is unavoidable, but it needs more than ever to be informed by strongly networked communities committed to non-violent democratic practice.

Bentley felt as good as it did because we had a clear view across the spectrum. We knew that our power starts in community and we knew that united we could achieve much. We need more than ever to build bridges. Whether we are vaxxed or unvaxxed, however we gender identify, whatever our diverse abilities, whatever our complex ethnic and cultural backgrounds. As a human community we won’t constrain corporate and government power if we are fighting amongst ourselves.

The planet is calling. Humans are of this planet, we are the children of evolution. We are a big human family and only through our groundedness inside our bodies, on the planet on which we stand and in community can we find our way forward.

Much love and let’s hope we can move beyond the pandemic and refocus ourselves on the bigger challenges ahead.