Democracy and rights under threat in corporate police state

On August 21, 2018 · Leave a Comment · In Commentary
It’s time we had a good hard talk about the corporate assault on democracy that is unfolding all around us. Globally, democracy is not faring well, with emergent authoritarian regimes such as Russia and China gathering strength whilst existing democratic states in Australia, US and Europe and UK struggle against a persistent attack from neo-liberal ideology. 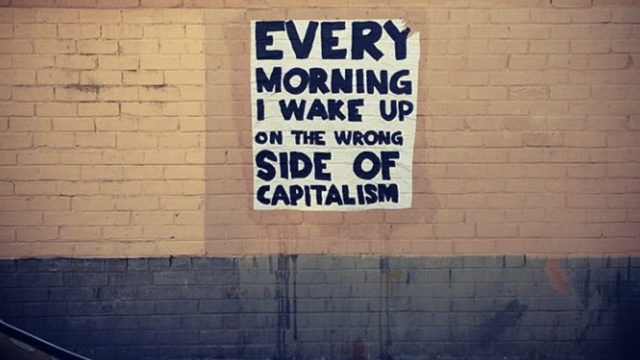 Democracy is about much more than elections. The large corporate sector worked out ways to manipulate our elections a long time ago, mostly through donations and funding of the major political parties (LNP and Labor) and through the establishment of a revolving door between high political office and big corporate power. The mining, pharmaceutical, armaments and agricultural chemical companies are some of the main donors and manipulators of domestic politics.

Where elections can be swayed with money, what had always been beyond the reach of the corporate sector was people power in the form of our rights to organize and assemble and to mobilise public opinion, and that’s what they are going after now, with the help of our politicians in government. The corporate word for democracy is ‘sovereign risk’, that’s wherever our self-determination might threaten their investments.

So let’s look at present day NSW and Australia to see what is being done to erode our civil rights and by whom.

The power of trade unions has been subjected to decades of legislative attacks designed to reduce their ability to mobilise collective power. The the new “Change the Rules” campaign addresses this attack on unions and deserves our support.

But more recently we have witnessed a steady assault on the right of public protest and assembly by the Liberal and National parties. In every state where the LNP has held government in recent years, (Qld,Vic, WA, Tas and NSW) we have seen attacks on the right to protest. At the federal level there have been attacks on charities, attempts to withdraw rights to challenge environmental approvals, even attempts to ban some forms of satire. The latest federal initiative is laws to use the military to oppose civilian unrest.

Most dramatically last month, a regulation was introduced to remove the long standing right of assembly on public land throughout NSW. That right with the stroke of a pen is now just a police officer’s discretion. The Greens are leading the charge against the anti-protest laws. Unlike the major parties the Greens do not accept donations from mining companies, big pharma and other corporate behemoths, so it is no surprise that the Greens are the driving force here. 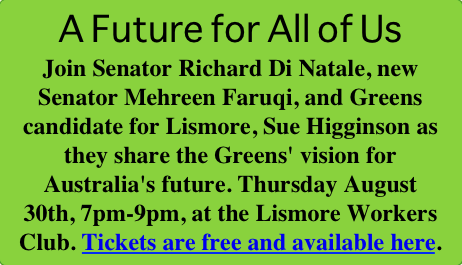 What else can we do in the Northern Rivers to defend democracy? We have a state election coming in NSW next March and we need to mobilise ourselves and fight for our democracy and make sure we remove the National Party politicians who are responsible for these extreme anti-democratic laws. Senator Richard Di Natale will be in Lismore on August 30th, sharing the Greens’ vision for Australia’s future with new Senator Mehreen Faruqi, and Greens candidate for Lismore, Sue Higginson. Join them from 7pm-9pm at the Lismore Workers Club. Tickets are free and available here.

The National Party politicians in the Northern Rivers are the local face of the global corporate police state and we need to kick them out. There is a very real likelihood the Greens can win Lismore and retain Ballina and a chance that they could obtain the balance of power in state parliament. With the balance of power it is possible to reverse anti-protests laws, and to improve the accountability and transparency of political donations. These kinds of reforms won’t be done by either of the old major parties on their own as they have too much reliance on corporate donations.

So for the rest of this year this is an issue that must not be allowed to rest. The government will be reluctant to move against protest actions this side of the election, but if they are re-elected it will be a different story. It really is a love it or lose it moment when it comes to our rights to protest. It’s up to all of us from here.