Avoiding the abyss of conspiracy theories

On September 9, 2020 · Leave a Comment · In Commentary
Normally we hope that crisis brings the best out in people: cooperation, mutual aid and empathy. This seems to be true of bushfires and floods but something about this pandemic is driving a divisiveness that is making our lives feel more unhinged and conflicted than ever.

Social media has begun to feel like a crowded street full of mad people yelling at everyone else. I have had friends contacting me expressing their sadness at watching friends and family get sucked into the rabbit-hole of conspiracy theories and like some macabre recycling machine, popping out the other end as tacit Trump (fascism) supporters, sceptical of science and expert consensus on a whole range of issues.

Once we fall into the abyss of believing that all opinions are equal, we have already given up on the idea of knowledge itself. Specialisation of knowledge and respect for each person’s hard earned expertise in their field of knowledge is the foundation of our ability to survive and thrive as a society.

We go to a surgeon to set a broken bone, a mechanic to fix our car, we take our computer to a tech expert to be repaired. We go to doctors as well a range of expert allied health professionals like osteopaths, acupuncturists and physiotherapists to help with ailments.

Sadly, when climate change began to be identified as an emerging existential threat to our planet and our collective survival, it didn’t suit the fossil fuel industries and so a deliberate and disingenuous campaign of climate denial began. It was the first major departure from our collective respect for scientific consensus. Now the genie is out of the bottle and climate denial has become wholesale science denial.

It is normal for individuals to engage in some sort of denial at first when they get diagnoses of life threatening illness and so on, no-one wants to have to accept these things and we scramble around for anything that can take the fear away and allow things to return to normal. At times like these a person’s community is their life line, individualism cannot save them from the isolation and fear.

Sadly when you are in denial, reality and objective information starts to appear as a dark and threatening voice. It can be tempting to shoot the messenger. To blame and doubt the doctor, the climate scientist or even the mechanic who tries to tell you your car needs a $2000 repair. But when this denial of reality occurs on a society wide scale we have a real problem. Looked at from the standpoint of fearful denial of the problem, reality starts to look like a conspiracy, purely because so many people seem to still believe in it. For Trump’s fascists, reality itself appears to have a left wing bias.

The pandemic is another example of news that people don’t want to hear, of expert opinion that keeps affirming something they don’t want to accept, and worse still, of precautionary measures that they find frustrating, inconvenient or in some cases financially, and socially ruinous.

The other thing about crises, and none more so than a pandemic, is that they require a community response if we are to successfully contain them. This means that as individuals we may have to take a hit for the greater good and this runs counter to the hyper-individualist culture that we have grown up in. 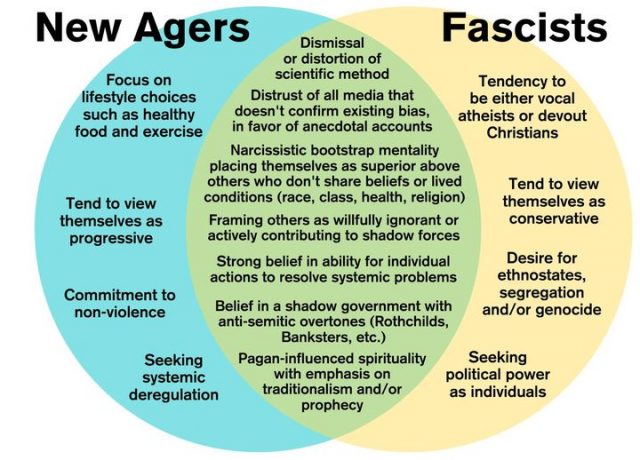 Hyper-individualism is a disease of the mind. It suits corporations to divide us into singular units of consumption and seduce us with the false utopia of endless personal choice, but the reality of life on this planet is that we are in this together.

How can it be that suddenly we are witnessing people that previously seemed to embrace ethical social and environmental values being suddenly turned to tacit Trump supporters. At first it looks like a major transformation, but on closer examination we might start to see the common threads between those who are susceptible to the right wing conspiracy theories that are jamming the airwaves at present.

Hyper-individualism is a psychological condition that has been fostered by corporate culture. It is probably embedded in us all, but its opposite pole is being communitarian. Being aware of our place in the whole, in nature and in society.

If we lose this awareness we may feel ‘liberated’ and ‘autonomous’ for a while but ultimately what we will become is isolated and after that possibly paranoid. There’s plenty of hyper-individualism within new age spiritual culture, and this is where the cross-over is taking place. Trumps political machine is deliberately targeting the hyper-individualist fringes of new age culture to recruit people to their upside down white supremacist world view.

Individualism is like a consolation prize, the scraps that are left after we have lost our vital empathic connection to others, to our communities and to nature. In the advanced stage of hyper-individualism victims cling to their individualism las though it is the most precious possession of all. Sadly, by this stage, it’s all they have left, so any threat to it seems all-encompassing.

Go for a walk in nature, hold a baby and look into its innocent eyes and feel how deeply it relies on connection and care from its community. No one has ever been born alone. None has ever grown to illusory ‘self-mastery’ without being supported every step of the way by others.

Try to connect, validate their fear and scepticism about the world. Yes, corporations and governments have breached our trust and exploited us. Take them for a walk in nature.

Hyper-individualism leads to isolation and isolation leads to fear and paranoia. We are facing not just one crisis but a series of impending crises as we walk into the climate future that capitalism has delivered. We are all in this together, with nature.

However insane the world of humans seems right now, the stars are still sane, the earth is still sane, the animals are still sane. Connect to these things for our mental health. We are going to need each other. We are also going to need all the experts in their various fields to help us find solutions. Let’s respect each other’s fields of expert knowledge and find humility in that. That’s what being open minded really is.