Liberty, freedom and civil rights? Do any of us understand these things anymore.

On September 17, 2018 · Leave a Comment · In Commentary
Words like freedom, rights and liberty are values that the vast majority of people aspire to for themselves and others yet they remain poorly understood and as a result vulnerable to being manipulated. 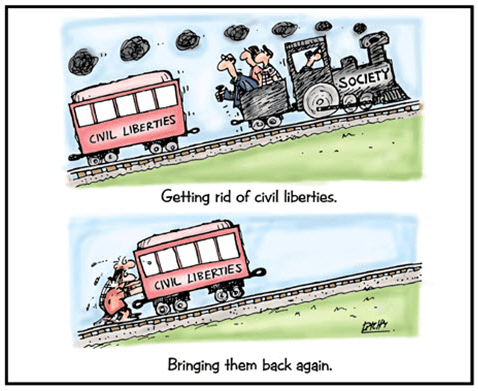 When we think of the word liberty or libertarian, sadly many of us we quickly picture gun-toting rednecks from the US or Australian gun lobby working themselves into a froth about their ‘right’ to bear arms, or bigots in Australia apoplectically defending their right to free speech so they can engage in racist and homophobic hate speech. But these very same right wing ‘libertarians’ also support draconian anti-protests laws.

The subject of liberty and rights has become a framing contest that is being dominated by the powerful. So let’s break this down a little.

There are several categories of right, let’s call them civil and political liberties; personal freedoms; and entitlement rights.

Civil and political liberties are collectively held and are the very foundation of a fair and democratic society. These are the kind of things you will find in a document like the International Covenant on Civil and Political Rights (ICCPR) and includes things like, the right to peaceful assembly (protest), freedom of association, and freedom of speech. These are the real liberties that uphold a free and fair society but unfortunately these are the ones most at risk in modern Australia as the global corporate sector leans on successive governments to curtail these rights.

They also include the rights that underpin a fair legal system: due process, the presumption of innocence, the right to silence, and an independent judiciary.  You might think these are safe in Australia but you only need to look at our drug laws, our bikie laws and our anti-terror laws to see how far we have strayed from upholding these principles in recent years. In NSW even the right to silence has been abrogated for serious criminal offences.

The next important category are rights to personal freedom, autonomy and self-determination. These include our rights to use our bodies as we choose, whether as drug users, sex workers, gay, straight or other, to experiment with lifestyle. These personal freedoms also include our personal rights to choose our own faith and spitirtuality. Which is ironic because traditionally it has been religious moral conservatives who have been most oppressive of other people rights to lifestyle autonomy.

The last group of rights are entitlement rights. The right to shoot MY gun, where I want, to drive MY 4WD where I want or to do what I want on MY land. Suddenly we see where the so-called libertarians of the right are coming from. These are not civil and political rights at all, these do not help uphold the institutions of democracy, nor to deliver fairness or equality to all people, or protect the rights of people to lifestyle self-determination. They are largely the stuff of entrenched privilege,  property rights enjoyed by the haves.

Right wing libertarianism has a fatal flaw in its logic. It promotes minimum government interference in the lives of the powerful, opposes progressive taxation (taxing the rich), and argues for smaller government at every turn. Hang on at every turn? No, there’s one huge gaping exception. Right wing libertarians support the endless expansion of the ‘nightwatchman state’. The massive police, court and prison (and now private prison) system that keeps an unequal property system in place and that rounds up and imprisons the have nots. The USA has the highest prison populations of any regime ever in history, it has severe prohibitions on drug use in most states, and severe laws against the sex industry. But there’s guns, there’s privilege and there’s a huge wealth disparity.

Left wing libertarianism on the other hand sees the property system as part of the problem and the real emancipation of people to be associated with an effort to promote equality. Civil and political rights enable groups with a grievance to organize mobilise and advocate for their advancement as Australia’s trade unions and environment groups have been trying to do for many decades. The left of Australian politics (Greens and Labor) have always been more sympathetic to campaigns to decriminalise things like diverse sexualities, the sex industry and personal drug use.

Freedom of speech also underpins an open society. Free speech has never been an absolute right however. The right to free speech is most valuable to ensure open discussion and criticism of government and powerful institutions such as corporations.

We should be rightly cautious about any incursions on free speech, but we should also understand that there may need to be exceptions. Defamation laws for example are an exception as are laws against hate speech. Hate speech does not serve the function of speaking truth to power. The laws against hate speech are designed to protect the rights of minorities to live in safety and not be subjected to potential mob violence and discrimination.

The entitlement right to do what you want on your own land places land ownership above collective well-being, above ecology and above intergenerational equity. There has never been such an unfettered right. We could learn much from first nations people about our responsibilities to the environment rather than our self-centred entitlements to exploit it.

So be aware, the so called libertarians of the right are really just protecting vested wealth and privilege at your expense. There is a need to clarify our thinking around these ideas before it is too late and assert that collective civil and political rights are the real liberties worth protecting, and that personal rights to self-determination are also important for all people. We need a Bill of Rights in Australia to arrest the steady erosion of our rights and civil liberties, but it needs to protect people and the environment not the entitlement rights of a few gun-toting land owners, or the right of a few racists to engage in public hate speech.