On March 2, 2019 · Leave a Comment · In Commentary
The coming state election is a huge opportunity for our region to gain its own voice in what is likely to be a very close and quite possibly a hung parliament. Recent statewide polling suggests the election will be very close but that Labor is unlikely to be able to gain a parliamentary majority in its own right. To defeat the Libs, they will need the support of the Greens members in parliament.

The Northern Rivers seats are extremely close because the Greens have for over two decades been steadily eroding the traditional support of the National Party. However, the Nats still enjoy the highest number of first preference votes, which means they can only be defeated by the combined force of Green and Labor first and second preference votes.

We need to be informed and disciplined when we vote because the voting system is designed to favour a two-party system and to break that system we need to use the power of our preferences wisely.

Analysis of the voting figures for the last 5 elections in Lismore tells the story of the long term voting trends. The Greens are the only party consistently growing its vote. It is the Greens rather than Labor that are driving the Nats towards defeat. We know this because the Labor vote has not risen above its 1999 level and has in fact receded slightly over successive elections to 26% in 2015. In the same time the Greens vote has steadily risen from 10% in 1999 to over 26% in 2015. Meanwhile the Nats have fallen from an average of around 52.5% down to 42% in 2015. 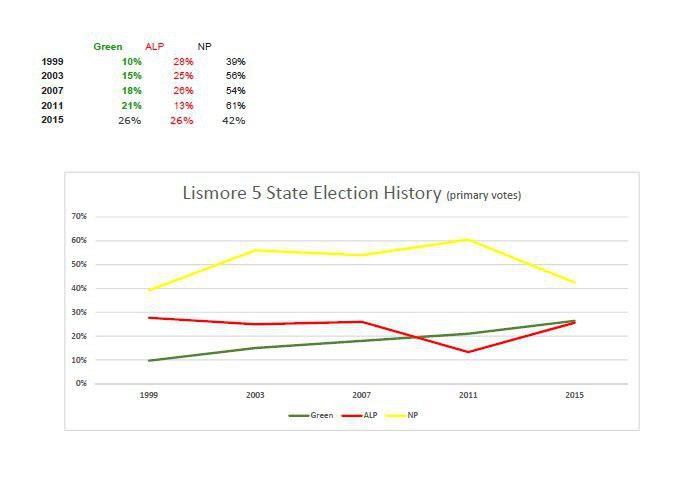 This tells us several things. Firstly it destroys the myth that the popularity of the Greens in 2015 was only related to CSG, instead it was the result of a long term rising trend. Secondly, it shows us that the Greens (not Labor) have been the actual two-party preferred challenger to the Nats in both the 2011 and 2015 elections in Lismore and are likely to maintain that position on current trends. The Greens eclipsed the Labor vote in 2008 and have maintained that position. Third it shows the continuing decline in the Nats vote.

The 2011 election results are a little anomalous however because the Labor vote crashed (causing a temporary spike for the Nats) on the basis of the coal corruption scandals that were revealed by ICAC around that time. Sadly, only bribes in brown paper bags are defined as coal industry corruption, whereas as the business-as-usual model of corruption where the industry donates million$ to the major parties in exchange for unfair policy influence goes unchallenged.

I see the long term trends as being about people’s identity and values. The Nats have long traded on the idea of people voting for them because they are ‘country people’, and Labor has traded on the idea of ‘workers’ voting for them, but the influence of corporate donors among other failings has bred skepticism toward the old parties. We are seeing a rising tide of people who are identifying the Greens as the party that best represents the values of the Northern Rivers as the emerging powerhouse of progressive politics, cultural innovation and economic renewal in Australia. People are looking inside of themselves to their values and saying, “I love the Northern Rivers, I want it protected and I want it to have its own unique voice, that’s why I’m voting Green”.

With an excellent candidate in Sue Higginson and a supercharged community-based campaign the Greens are well on track to take Lismore provided progressive voters use the power of their preferences.

Now back to explain why your preferences are so important.

NSW is out of step with the federal voting system and most states and territories in that we have an optional preferential voting (OPV) system for state elections whereas the more usual method in Australia is compulsory preferential voting (CPV). Whilst having options may sound good, in reality it massively increases the risk of your vote being wasted entirely if you don’t preference wisely.

In the last election in Lismore, the Greens would have been elected under a CPV system but narrowly missed out because over 30% of Labor voters simply voted 1 for the Labor candidate and failed to follow through with a number 2 preference to the Greens. For every one of those Labor voters who failed to preference, their votes were effectively binned in the final count, allowing the Nats to sneak back in. The same applies in reverse, Greens voters should preference Labor number 2 to also maximize the chances of tipping out the Nats.

Let me also explain how your vote can get wasted if you don’t preference. On the first round of counting the candidates are ranked by first preference votes alone and candidates at the bottom of the list get excluded and their preferences (if any) get distributed up the line to the candidates that are still in the race. This ‘exclusion’ process continues until we get to the big three (Nats, Greens and Labor) at this point it is a very close contest between Greens and Labor for the number 2 position, whichever of them achieves number two, becomes the ‘challenger’ to the Nats, number three gets excluded and the preferences of the excluded party then hopefully flow to the challenger.

As these successive rounds of exclusions take place, in an OPV system, any ballot papers that have no preferences left to distributed are referred to as ‘exhausted’ votes, because they have nowhere left to flow.

It is important then, vital actually, for Labor and Greens and all progressive voters to enter preferences for Greens and Labor. If you don’t do this, you may be helping the Nats to win.

Last election we rallied behind a call to “number every square and put the Nats last”, this can still work, but for simplicity the new slogan is “1 and 2 is all you need to do”, meaning that as long as you have preferenced the Greens and Labor then your vote will definitely count. If you are voting first for a micro party then you may be safer following the old “put the Nats last” rule if you really want your vote to help tip out the Nats and give the Northern Rivers its unique voice as the clean Green capital of cultural innovation that it can be.

Of course, it is your right to number your ballot paper how you choose, but this is my advice.