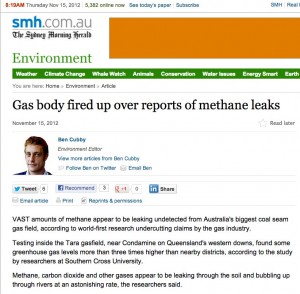 The finding of massive methane leakage from CSG mining is of global significance and is a potential major blow to this industry. Now watch the mining industry viciously attack the independent researchers who have blown this whistle.

In coming weeks you will see industry-owned scientists attacking these guys vehemently, just like the tobacco industry attacked doctors who suggested smoking led to cancer.

VAST amounts of methane appear to be leaking undetected from Australia’s biggest coal seam gas field, according to world-first research undercutting claims by the gas industry.

Testing inside the Tara gasfield, near Condamine on Queensland’s western downs, found some greenhouse gas levels more than three times higher than nearby districts, according to the study by researchers at Southern Cross University.

Methane, carbon dioxide and other gases appear to be leaking through the soil and bubbling up through rivers at an astonishing rate, the researchers said.

”The concentrations here are higher than any measured in gasfields anywhere else that I can think of, including in Russia,” Damien Maher, a biochemist who helped conduct the tests, said. ”The extent of these enriched concentrations is significant.”

The researchers drove back and forth on public roads through the gasfields at Tara, taking measurements every second via a cavity ring-down spectrometer – the only instrument of its type in Australia. It enabled them to take thousands of real-time readings of several gases in the air and pinpoint them with a global positioning system.

”Everything we’re finding shows that something major is happening and we need to look deeper into the problem,” said Isaac Santos, a senior lecturer in biochemistry at Southern Cross University, who worked on the study with Dr Maher. ”I think what it shows is we have to go through all gasfields, and potential gasfields, and take measurements so we have baseline data to work from.”

The federal government is reassessing its methodology for measuring greenhouse gas leakage from coal seam gas fields, and the researchers have sent a submission to the government asking it to take their work into account.

The Tara gasfield operation is owned by BG Group, a British multinational gas and oil company, which directed questions to the industry body, the Australian Petroleum Production and Exploration Association.

”The claim that large-scale fugitive gas emissions are a result of coal seam gas production, before they even do their research, seems to indicate a bias against coal seam gas,” the association’s chief operating officer for the eastern region, Rick Wilkinson, said. ”This does them no credit and it diminishes the good work by many other scientists in an age where scientific endeavour has been wearied by community scepticism.”

The researchers have submitted two papers on their findings, which have been seen by Fairfax Media, and the papers are undergoing a peer-review process before publication.