Conflict inevitable as gas mining is forced upon unwilling communities 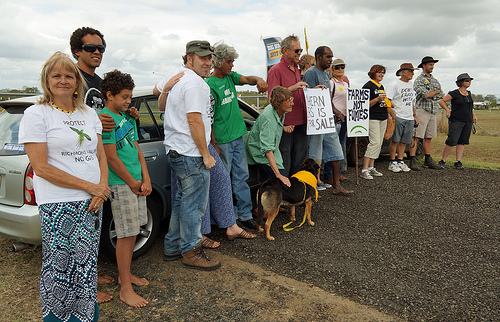 We are witnessing a grand failure of democracy and governance in NSW as the government continues to pander to the powerful fossil fuel industry and ignore overwhelming public opposition to unconventional gas mining, fracking and coal expansion.

Nowhere is this more evident than in the state’s north where the Northern Rivers community has shown repeatedly in polls and comprehensive resident surveys that more than 85% of the population wants to remain gasfield free. This figure is actually conservative; in September in the Lismore Local government area an official AEC poll confirmed 87% opposition to unconventional gas development. This figure confirmed the results that were coming in from community surveys being conducted as part of the Gasfield Free Community process.  Those results reliably indicate opposition to gas mining between 85% and 98% throughout the Northern Rivers including 85% in areas near Casino, previously assumed to be the regional  heartland of support for the mining industry.  In any functioning democracy these figures would be a death knell for an unpopular, destructive and dangerous industry.

Clearly there is something very wrong with democracy in Australia when it comes to communities challenging the dominance of the fossil fuel lobby. This lobby has spent decades sewing up its links with politicians of all major political parties in Australia and now occupies a privileged position that threatens the integrity our governance system. The industry is over subsidised, under regulated and in the case of the new unconventional gas industry under-researched.

What else could explain a government granting a production license to a mining company barely three days after an overwhelming official public vote recorded 87% opposition?

When governments and corporations combine to steamroll communities in the face of such overwhelming opposition it is inevitable that serious conflict will result. Fortunately the social movements opposed to unconventional gas are committed to peaceful protest and non-violent direct action as the only remaining democratic avenue left to these embattled communities to protect themselves, their water and their environment.

Several weeks ago numerous people from over 10 locality based groups attended a protest at Casino to attempt to disrupt seismic operations by the gas corporation Metgasco. These were peaceful protests; no arrests were even made. Despite this the gas company is complaining vocally in local media about the protests, alleging intimidation and even theft.

The social movement involved does not and never will condone theft or any real intimidation of persons, but it has to be remembered this is community action involving a huge groundswell of opposition that is being completely betrayed by government. What is remarkable is that the organised elements of the movement have been so successful in keeping the public response peaceful and positive and this is largely the result of an intentional program of non-violence training they have provided over the past year. The community is understandably outraged at the arrogance of the gas company and the betrayal by government.

Make no mistake unconventional gas mining is being imposed on this community against its will, against the will of over 85% of people. This is an empowered community that will not back down. As the CSG free Northern Rivers banner says “our resistance is non-violent but non-negotiable”.

More recently communities At Glenugie near Grafton were taken by surprise when preparatory work on a drill pad commenced without neighbouring landholders being informed. Protests ensued and the work is at a standstill. Protests will follow these companies everywhere they go because this is a decentralised grassroots network, that enjoys near consensus support in the Northern Rivers. The CEO of Metgasco came to town speaking of a social license but more recently speaks repeatedly in terms of threats of prosecution against those who resist his company. The hand shake has been replaced by the jack boot as  Metgasco’s approach.

The gas companies and the politicians they control clearly hope to force their way onto these communities and it is sad but true that conflict will result. The organised movement will be peaceful, but the organised movement can’t control all elements, especially in rural areas. Farmers resisting invasion of their farms by gas companies may do things (and have the means to do things) that no social movement organiser would ever recommend. It is fair to say that if the organised and peaceful social movements were to fail in empowering communities and facing down this invasion by mining then the resulting conflict could be far worse. No-one wants to see violence or vandalism erupt, but the government and the mining companies are risking this very thing if they continue to ignore the community’s voice.

I am a lifelong advocate of peaceful protest and I sincerely hope that people will continue to put their trust in the organised movement and not resort to other means to vent their frustrations at what is in reality a foreign invasion of their region. Unfortunately history shows us what happens when governments ignore their populations, and so we need to expect this to be a bumpy ride.

There is of course always an easy way to call a truce on all this potential for conflict. It’s called a moratorium. That would be the democratic thing to do.