On April 5, 2012 · Leave a Comment · In Commentary
This story was originally going to be published in The Conversation, but was pulled because it was “too politically risky”

“The movement in opposition to coal seam gas mining represents a seismic shift in rural politics.” 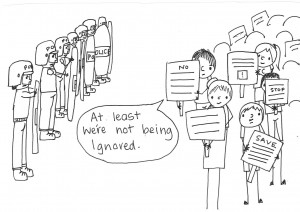 The Activists Handbook by Australian author Aidan Ricketts has recently been released by Zed books in London and is available as well in The US through Palgrave Macmillan. The book is currently spreading rapidly throughout the emerging movement in opposition to coal seam gas throughout Australia. Due to the dispersed and locally autonomous nature of the coal seam gas movement a whole new demographic is now becoming activists for the first time. Formerly conservative rural people, farmers, and local business people are joining in to fight an industry that threatens social environmental and economic values of rural communities.

The Handbook is proving invaluable as a reference manual for the new movement. The book provides accessible and comprehensive information about activism techniques and processes as varied as conflict mapping, strategic planning, non violent direct action, digital activism and anti-corporate activism. The book reflects years of hands on experience and extensive research by the author and is presented in a plain speaking “how to” style.

The movement in opposition to coal seam gas mining represents a seismic shift in rural politics as experienced green activists link up with angry and motivated farmers and rural communities to find a powerful new voice to resist the ravages of a mining industry out of control. In the process new alliances are being forged, old political divides collapsed, and thousands of people are deciding that the government has failed them and that they need to take on the mining companies directly. All of this passion needs direction and together with other trainers in the movement Aidan has been busily rolling out training to eager rural communities. In the last few weeks he has conducted campaign and non violent direct action training workshops in Lismore, Kyogle and Grafton and many more are planned. It’s hard to be in many places at once but the value of the book is that people can get hold of it, read it at home and start putting some of the techniques and processes into place in their own communities.

Already new strategies and tactics are emerging as hallmarks of the new social movement. The now famous Lock The Gate strategy has been a powerful rallying call for rural communities, urging them to stand together to prevent mining industry trespass upon their lands. More recently this community based resistance is being taken to a new and more sophisticated level in what is being called the “CSG Free community strategy”. This strategy goes beyond locking the gate, and takes the resistance into the public realm and aims to lock out gas companies road by road, village by village and region by region. Organised in a pattern not so dissimilar to rural bushfire brigades, local communities are joining together to declare their roads no go areas to all coal seam gas activity. “Lock the gate; lock the road; protect the region! This road is gas field free, protected by community” the signs say. This whole of community resistance strategy is bold and new. It is arguably the most significant shift in non violent resistance tactics in Australia since the earliest environmental blockades in the 1970s. farmers have already shown their preparedness to be arrested at ‘greenie’ style blockades in southern QLD and this new strategy will involve even more widespread resistance to mining activity.

This new movement with its new strategies will be very difficult to counter, because it is a dispersed movement with no central organisers. Whilst there are local, regional and national alliances providing intellectual, logistical and process oriented support, (go to www.csgfreenorthernrivers.org/ ) this new movement is a grass roots movement that directly empowers locally autonomous groups. It is perhaps not surprising that rural Australia should be the scene for the emergence o0f such a bold new approach, and particularly in the Northern Rivers where 40 years of cross fertilisation of cultures between hippies, greenies and traditional farming communities has produced a region known for its social ingenuity.

The Activists handbook together with the roll out of training is empowering people to form local autonomous groups and to take a stand. Many in the northern rivers believe that the rest of the regions are watching and the industry is watching. This will be a major battleground between the people and the mining corporations. The Activist Handbook has found its mark.

The Activist handbook can be purchased online at www.aidanricketts.com The author Aidan Ricketts is offering a 10% donation back to participating social change organisations for all sales referred by the participating groups