On January 12, 2018 · Leave a Comment · In Commentary
If dying rock stars was the worst thing about 2016 then things must have been very comfortable back then. 2017 has been a bit of a shocker. It could not have been a worse start really with the hapless Trump maladministration getting underway. Trump and his rapidly disintegrating band of cronies has been a massive boost to corporate domination of economic and political life, a backward step for the environment particularly on climate change and a serious global security risk. 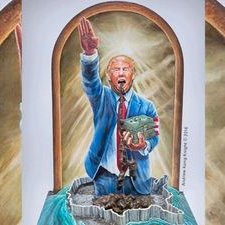 With Brexit, Trump and the madness of Turnbull’s endless capitulation to a tiny band of extreme right wing nut jobs (Abbott, Dutton, Abetz etc) things have not looked much better in Australia.

I was devastated earlier in the year when the Greens Senators Larissa Waters and Scott Ludlum resigned over dual citizenship issues, but as it turned out, they were just the honest ones. Lurking behind the honourable resignations of those two Greens was a long line of pollies from the other parties who had neither the decency nor courage to admit it and to resign, instead they hid in their plush offices hoping not to be discovered. In the case of Barnaby Joyce, even continuing as Deputy Prime Minister despite being ineligible to sit in the parliament. Well the whole saga may well have an upside, the federal government may lose its majority and be forced to an early election, or at the very least we may see a much needed Commission of Inquiry into the banking system, something Turnbull’s mates in the big four banks are terrified of.

Then there was the pain of the postal survey and grueling public debate about whether people should be allowed to marry other people. The pain this brought upon the LGBTIQ community was enourmous and totally unnecessary. But thankfully it backfired majestically on the right wing nutjobs who created it, proving conclusively that their claim to represent some silent majority is pure self-deception. Apart from the obvious benefits of allowing same sex marriage, the greater legacy of the postal survey is proving the minority status of the conservative lobby. Apparently they are still ‘hurting’, (world’s tiniest violin).

Closer to home we have watched the monstrosity that is the Adani mega mine proposal enjoying the loyal and irrational support of politicians from both major parties. The fossil fuel industry has embedded itself into the major parties comprehensively over the last 60 years and enjoys substantial influence over both Labor and the LNP at state and federal levels. Despite being narrowly elected several years ago on a promise to protect the reef, Anna Palaszczuk and her supposedly left-faction dominated government about turned and became one of the Adani mine’s biggest supporters. Stupid politics in the extreme. The Adani proposal lacks a convincing business case and most responsible financial institutions have recognized this already. Palaszczuk could have easily taken a middle road, leaving the fate of Adani to market forces, and spared her party the generational odium of going down in history as shameless climate criminals, but instead tied her colours to the mast of Adani’s  coal ship.

Fast forward to the recent QLD election and Palaszczuk found herself having to backflip on her governments support for a massive 5 billion dollar taxpayer handout to Adani when labor realized they were bleeding support to the Greens’ anti-Adani stance in inner city Brisbane. The Greens can take credit for that backflip, even though they failed by the smallest of margins to nab two inner city seats off the Adani Labor Party. Of course the only thing worse than a Palaszczuk victory for the environment would have been an LNP or One Nation victory but this did not eventuate. As I write the Greens still stand a good chance of picking up their first lower house seat in QLD, a former LNP seat held by a senior LNP with possible leadership ambitions. Of course Labor will still be backing Adani, but hopefully they can be kept to their pre-election promise to abandon their support for the taxpayer handout to the mine.

Add to the Greens strong results in QLD was the resounding win in the Northcote by-election in Victoria and we can start to add up the new green shoots that are emerging in late 2017. I’m not a great fan of the pendulum theory in politics, but we are seeing renewed energy from the left and green side of politics and it’s much needed.

It’s a way off for us here in the Northern Rivers but there’s another state election in early 2019 and we can expect to see a very tight election as between the Greens, Labor and the Nats for seats like Lismore and Ballina. Greens already took Ballina off the LNP last election, and with the retirement of the sitting Nats MP in Lismore, there’s a good fighting chance the Nats might lose Lismore in 2019. You can bet that campaign will start in earnest in the New Year.

So what began as a terrible year, has at least begun to show some signs of emerging strength for Left Green politics. A banks royal commission a real possibility, over 60% Australians supporting marriage equality, ongoing instability in Turnbulls government, and big swings toward the Greens in key areas means it’s not all gloom and doom. We still have that lurching zombie, the  Adani mega mine to put to death, but without taxpayers funds its business case only looks worse.

Have a great festive season readers, and come back ready to fight the good fights next year.