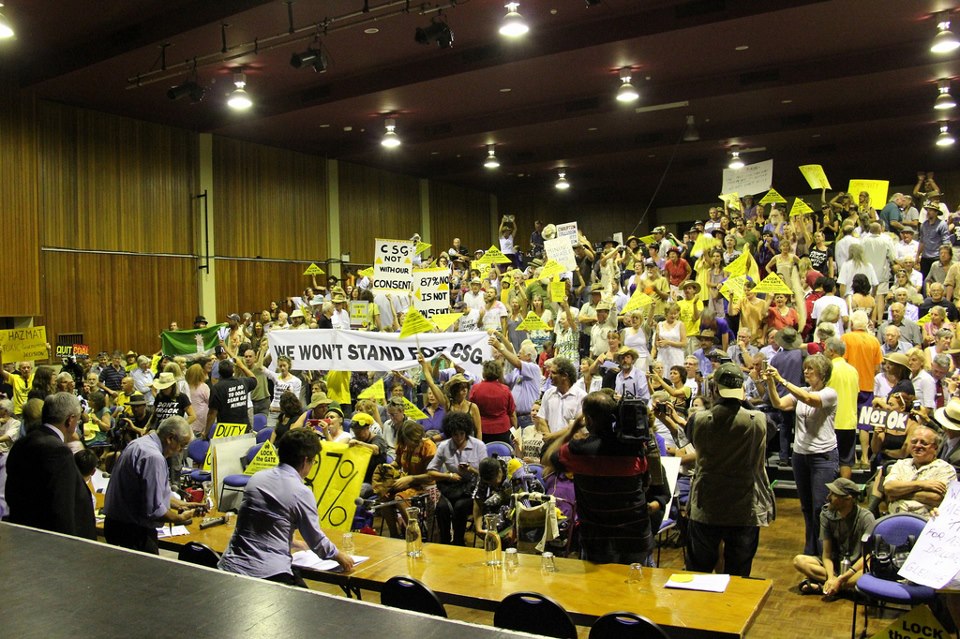 The recent visit of the NSW planning minister Hazzard and his departmental bureaucrats to Lismore was always going to be a fiery one. There’s an important context in Lismore. This city voted 87% against coal seam gas mining in September 2012, and three days later the NSW government renewed expired licences and gave one of the first approvals for csg production to gas company Metgasco, that operates exclusively in the Northern Rivers region.

The Northern rivers community are justifiably outraged at this failure of democracy and are not the kind of community to take it lying down. They have been busy building a social movement of immense popularity. Over 70 communities are now enlisted as gasfield free communities, and over 12000 households have been surveyed and consistently return results of over 90% opposition to csg. If writing letters, meeting with politicians and going to meetings was going to work then the government would have backed away long ago, but the community knows the government is deeply committed to this part of the fossil fuel industry.

A lot has been made of some reported events outside after the meeting where politicians were allegedly jostled, but this was a public meeting and this was an angry public in the raw. Sure there’s a strong core of a very organised movement there, but everybody knows you can’t control everybody. The meeting was rowdy but it was also an incredible example of a community taking back power. The minister had clearly intended a talking tour. It’s the sort of format where the speakers up front control the microphones and the agenda and who gets to ask questions.  It’s an easy format for an experienced operator to manipulate. The community was determined to break this power.

The community did have some strategies in place, within the first 10 minutes they had successfully gained control of the mikes and delivered them to local indigenous descendants who damned the politicians in no uncertain terms. This was followed by the delivery of scores of gasfield free road declarations from communities all over the region.  Then the questions flowed. Intelligent penetrating questions from scientists, farmers, business people and ordinary folk of all kinds. There were no less than 6 PhDs amongst those who asked questions, and also some very powerful emotional questions from other members of the crowd. Yes it was noisy but above all it was a powerful example of a community that will not be patronised by arrogant pollies. In an ideal world it would have been a few decibels quieter at times, and the bureaucrats would have been more audible in their evasive responses, but there were 800 angry community members in a hall with a minister who they see as the chief enabler of their betrayal.

Despite the exaggerated claims of jostling the police have reported that the crowd had a right to protest and there were no reportable incidents.

This community never rests, the day before the meeting work had been stopped all day at a blockade near Grafton, where a locked on protester prevented work on a drill site. This blockade is ongoing. Nonviolent resistance is hard work. The anger in this region is palpable and if it were not for the presence of an organised political movement offering some skilled leadership, the outcomes would be far worse.

The battle for the Northern Rivers is a seminal one for all of NSW.  The region has a long track record of powerful social movements and nonviolent direct action, and is now organised with the largest and most mainstream movement in memory. The government is pushing for a showdown, and has pushed Metgasco, a relatively small player in the world of mining, into the position of sacrificial pawn in a larger play. Whilst the larger resource companies look on, this embattled company that is almost entirely reliant for its survival on reserves in the northern rivers region, takes on the battle. For Metgasco it’s a fight to the death, for the community it is as well.

The problem for the company and the government is that this movement is ubiquitous. No matter how many blockades they overrun with police and trucks, no matter how many wells they manage to install against the odds, there will be another blockade at the next site because every community will come out to defend its patch.

The people of the northern rivers are not likely to ever surrender. Metgasco on the other hand appears to have been showing the strain in its share price.

You can check the share price story for yourself at this link  http://markets.smh.com.au/apps/qt/quote.ac?section=charts&sy=smh&code=CFX#topOfChartsAnchor

7 Responses to Lismore meeting a barometer of betrayal