Gasfields still threaten most of the region, how will you vote?

On March 9, 2015 · Leave a Comment · In Commentary
We are now hurtling towards the state election, here’s what the parties are offering on the issues of gas and coal. 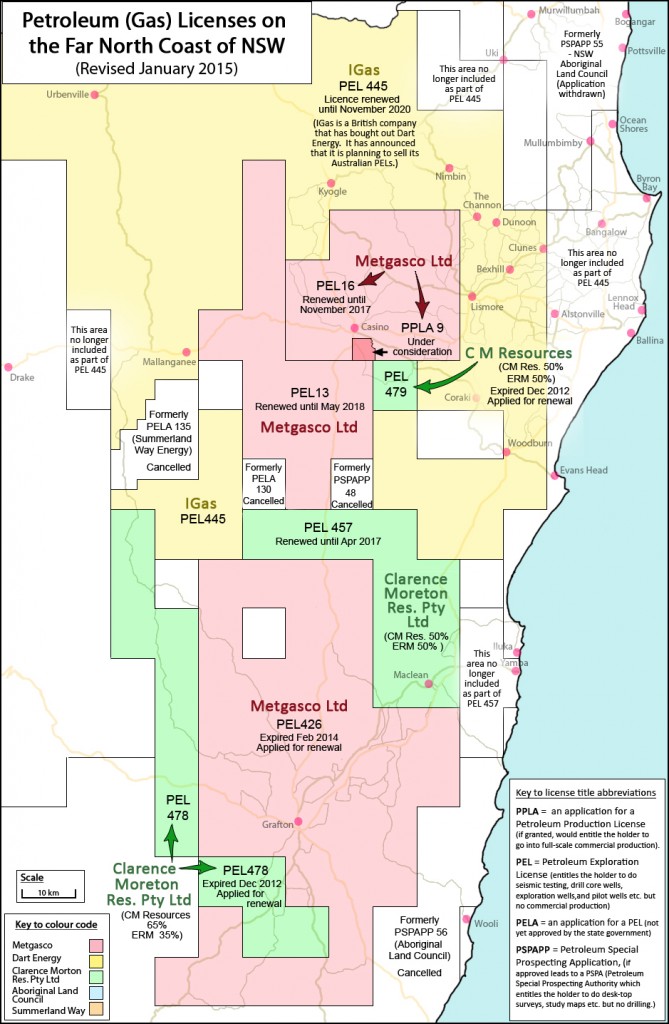 The best that the Liberal and National parties have come up with is the Gas Plan, which is really a Gasfields plan. Premier Mike Baird is on record as saying “Absolutely we want CSG”. The true colours of the LNP as the political wing of the mining industry are plain to see. The state government has approved a massive new coal mine over some of the states richest agricultural land on the Liverpool plains, confirming their betrayal of regional farming communities. At Maules Creek they are overseeing the destruction of ecologically vital remnant forests by coal mining and there are plans for yet more mines in the Hunter. Mike Baird, an old friend of the mining industry has also promised draconian anti-protest laws if re-elected to further sublimate our democracy to the will of foreign mining companies.

Closer to home we have seen the state government renew the massive gas exploration licence (PEL445) during the very same week that our 4 Northern Rivers National Party MP’s launched their so-called gas plan. PEL 445 threatens invasive gas mining in Northern Rivers communities ranging from Woodburn to Lismore, including Clunes, Nimbin the Channon and Kyogle; north to the QLD border and west past Urbenville and Mallanganee. That’s pretty much the whole of the Lismore electorate currently held by incumbent MP Thomas “Gasfields” George. What is not in the renewed PEL445 is mostly in Metgascos’ infamous PEL 16 and PEL 13 and 426 covering Casino, Bentley, Doubtful Creek and vast tracts of the Clarence region.

So there we have it, if we wake up after March 28 with an LNP government and with the gang of four National Party MPs returned in this region we will be staring down another four years of gas mining under martial law and more coal mines over farms and forests.

What does Labor offer? Well in the Northern Rivers they are offering a commitment to a Gasfield Free region, Labor and the Greens actually proposed legislation to achieve it in the Upper House last year but it was voted down by the LNP with the support of the Christian Democrats. But further afield the Labor’s gas policy in the rest of the state remains a lot less clear. They haven’t come out in opposition to the giant coal mine in the Liverpool Plains and have a very questionable history on coal. Still for the Northern Rivers at least they offer a solid policy against gasfields here, plus a commendable plan for a great koala park.

So what of the Greens? Well I’m sure those who were at Bentley could not have missed the tireless dedication of Adam Guise standing with our community, which has won him many supporters even amongst former National Party voters and farmers. I’m not a member of any political party but credit has to go to the Greens for having provided the most long standing and consistent policy and action against gasfields of any of the parliamentary parties. The Greens proposed a moratorium on the gas industry as far back as 2012 and have clear policies for a Gasfield Free Northern Rivers, and the rest of the state as well as strong opposition to new coal mines. They are the only party that completely rejects corporate and mining industry donations.

That’s how the parties line up as I see it, I won’t tell you who to vote for, but I will tell you that to make your vote count it is essential that you number every square and put LAST the candidate you trust least on gas policy.

Regardless of who wins it is good for democracy for seats to change hands. If they change hands from National to Labor it will certainly raise a few eyebrows, if a National Party seat or two was to fall to the Greens it would make national news and would be widely interpreted as a very strong vote against the unconventional gas industry.

The chances of shifting the incumbent members remains low but the recent result in QLD shows that anything is possible. Just like in QLD, real change depends on people numbering every square.

That’s about it for elections, of course if the government is returned it will once again fall to this region to defend itself from the gas invasion.

This article was first published in the Nimbin Good Times, March 2015.