For sale: your right to protest.

On March 23, 2016 · Leave a Comment · In Commentary
Australia is one of the few modern democracies that lacks constitutional protection of important civil rights such as freedom of assembly and the right to protest. Our rights can be removed by any government desperate, corrupt or short sighted enough to go down that path. 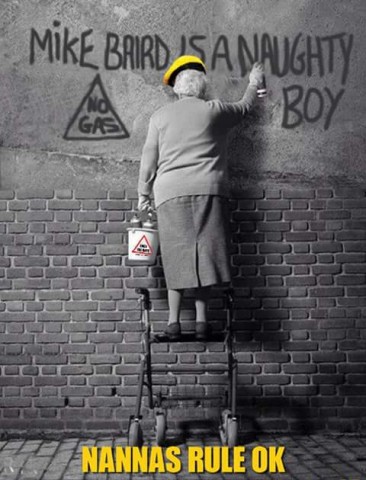 While the High Court has confirmed a limited implied freedom of political communication in our Constitution, it is weak and tends to protect the communication rather than the assembly or protest itself.

Our rights are disappearing alarmingly quickly as conservative state governments across Australia respond to pressure from the mining industry. Last week the NSW government announced a raft of draconian changes designed to disable popular resistance to gas and coal mining.

The wave of anti-protest laws is specifically driven by the powerful mining lobby, the big donors to Australia’s major political parties. There is certainly something rotten in the prospect of large companies buying a democracy where common people can’t even protest peacefully.

The police already had ample powers to arrest persons who cause obstructions, remove lock on devices and close areas of road from public access, so what are the new laws about?

There’s a tenfold increase in the fine for trespass (from $550 to $5500) but only if it’s a business premises, such as a mine. This is a continuation of the approach taken in WA, and Tasmania where the newly invented ‘right to do business’ is given precedence over recognised civil and political rights. This narrative is part of the ongoing global narrative of large corporations that democracy should never be allowed to interfere with corporate profit taking.

Secondly the proposed laws give police an open ended power to search vehicles and confiscate equipment that in their opinion may be intended to be used for a lock on. This could include numerous tools commonly found in farmer’s and tradesman’s utes, anything seized becomes property of the state, and the you can’t even apply to a court to get it back.

Police are also to be given powers to disperse any protest that might cause an obstruction, these dispersal powers are an arbitrary interfere with the basic right of assembly.

Finally protesters convicted of interfering with gas mining operations could now face up to 7 years jail, this could include farmers who attempt to prevent gas mining companies from entering their farms against their will. The significance of the maximum penalty is that it makes the offence a ‘serious criminal offence’ which in turn unleashes a raft of extreme police powers in relation to search, pursuit, a loss of the right to silence under interrogation, increased powers of electronic communications surveillance and possibly the application of criminal gangs legislation. To unleash all of these powers onto peaceful democratic social change organisations is of major significance.

This is the modern mining industry police state of NSW. Protests won’t stop of course, these laws just confirm how deeply industry political donations have become a cancer on democracy.

This article was originally published in the Lismore Echo, 17 March, 2016.