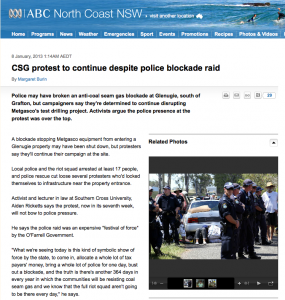 Activist and lecturer in law at Southern Cross University, Aiden Ricketts says the protest, now in its seventh week, will not bow to police pressure. He says the police raid was an expensive “festival of force” by the O’Farrell Government.

“What we’re seeing today is this kind of symbolic show of force by the state, to come in, allocate a whole lot of tax payers’ money, bring a whole lot of police for one day, bust out a blockade, and the truth is there’s another 364 days in every year in which the communities will be resisting coal seam gas and we know that the full riot squad aren’t going to be there every day,” he says.

“The government simply can’t sustain that and it’s not a business model for Metgasco either.”

While the State Government and the landholder has approved the project, Mr Ricketts says survey results show the majority of locals are against the industry and they have the right to protest against mining in the region.

“It’s quite clear that not just in the Lismore local government area, but throughout the northern rivers, 85 to 90 per cent of people are against coal seam gas.

“So given that, there really isn’t a social license for this to operate, locals are determined to defend their land and having a neighbour put a coal seam gas well on their land close to your boundary, is quite similar to someone deciding to set an asbestos mine.”