On August 12, 2015 · Leave a Comment · In Commentary
Prior to the state election politicians from all sides assured us they supported a gasfield-free Northern Rivers. Their judgement day is coming. 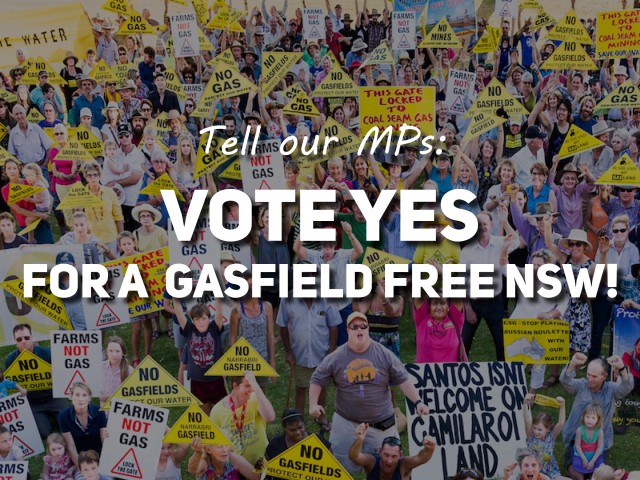 On 13th August, the Upper House of the NSW Parliament is expected to vote on a Bill to deliver sweeping new protections against invasive gasfields in NSW.

The Greens have proposed a Bill to ban unconventional gas mining in New South Wales. Whilst this would be welcome, concessions will have to be made for the Bill to get majority support in parliament. Labor is expected to amend it from a ban to a moratorium which will likely be enough to garner the crucial support of the Christian Democrats and the Shooters and Fishers Party for the Bill to pass. Both of these minor parties promised to support a moratorium at election time, so now they have the chance to keep faith with their voters.

It is expected that the Bill would seek to:

Nothing is ever certain with politics and this Bill faces some big hurdles. First it needs to get passed in the Upper House. You have less than a week to make sure the Upper House members, especially the crossbenchers know how you feel. Once it passes the Upper House it will go to the Lower House and that’s where things get tricky. The governing Liberal and National parties have the numbers in the Lower House and the Bill will need some local members to cross the floor to become law. There will be no place for local members to hide from public scrutiny at this point, either they support a gasfield-free region or they support the ongoing threat of industrial gasfields.

Under the government’s so-called gas plan not a single active license has been surrendered in the Northern Rivers so far. Metgasco has confirmed that they want to return and drill in our regions farmlands. If we truly want a gasfield-free region we (the 87%) need to contact our local members and fast. This is a job for everyone.

Its mining vs democracy time again. We don’t want to end up back on the barricades.

This article was originally published in the Northern Rivers Echo on 6 August, 2015