Time for Metgasco to admit defeat and back down 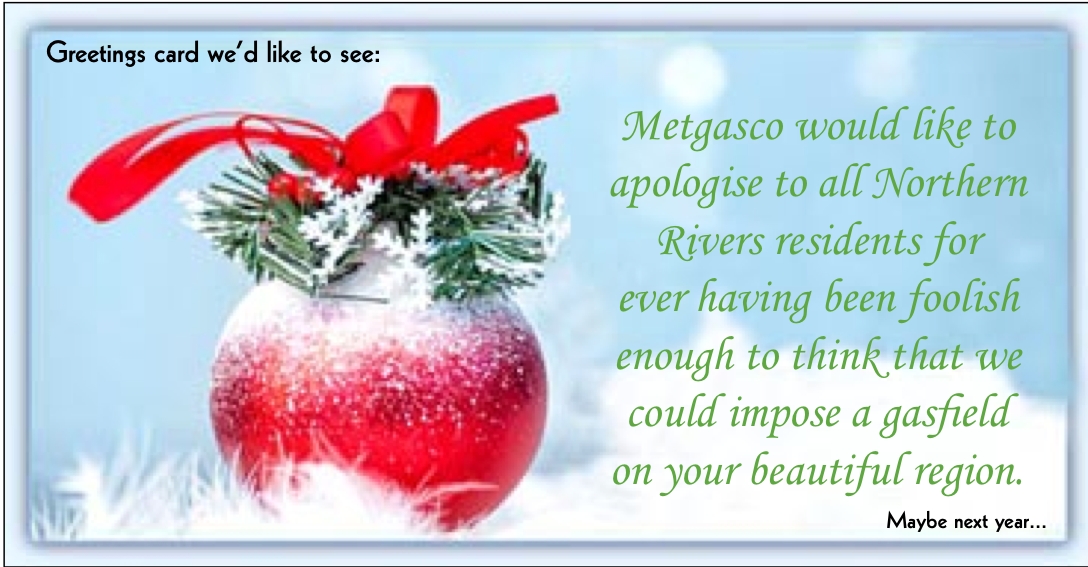 Image courtesy of The Nimbin Times

At a time of peace and goodwill (the summer solstice) it’s a good time to reflect on the best way forward to resolve the ongoing stand off between the overwhelming majority of Northern Rivers residents and the embattled resource speculation company Metgasco.

Resource speculation is by nature a high risk enterprise in which shareholders gamble on boom or bust stakes in the hope of making large profits. When it works it pays handsomely but when that speculation takes place in the wrong place or at the wrong time it can fall flat. There can be no doubt that Metgasco’s plan to industrialise the Northern Rivers faces insurmountable obstacles. The case for Metgasco to seek a dignified exit strategy from the Northern Rivers has become overwhelming.

Community opposition is only part of Metgasco’s problems. Their share price has taken a beating in the last 2 years and the change of federal government only served to deliver a very temporary boost of confidence for their investors. Furthermore there is evidence that the gas resource in the Northern Rivers is simply not as extensive nor as valuable as they once hoped. Part of the problem is that coal beds in the Northern Rivers region are based upon ancient river beds rather than large geographically extensive swamps and basins and so tend to be less extensive, less geographically continuous and less productive than in other areas. The lack of social license has exacerbated Metgaso’s problems because it has struggled to gain sufficient access to enable widespread exploration.

Metgasco has dwindling cash reserves and is faced with a devils choice, back out and face shareholder wrath or push ahead into Bentley and face the wrath of the entire region. We all know that the battle of Bentley will be hard fought by the people of the Northern Rivers who have already done all they can in peaceful and democratic ways to make it clear that Metgasco’s industrial invasion is not welcome. With 87% opposed in the Lismore LGA, 65% opposed in the Richmond LGA and with Kyogle council LGA also strongly opposed to Metgascos plans. There is simply no social license and there never will be.

I don’t think anyone wants to see 2014 turn into the ongoing saga of the battle of Bentley. It is not what the community wants, and it would be a major stress for the families that live around the proposed drilling sites near Bentley, who quite rightly fear contamination from neighbouring lands, and of course it would no doubt turn into a large scale theatre of protest. Lets also spare a thought for the regional police who would no doubt be called upon by Metgasco to ride shotgun once again as their drill rigs are forced upon an unwilling community. This is not a new year that any of us in the Northern Rivers can look forward to. Quite frankly Metgasco’s plans to force their way into Bentley are not just environmentally and politically reckless, and economically questionable they constitute a real threat to public safety.

It is time for the community’s leaders, including the mayors of all of the local government areas surrounding Bentley, and for the state and federal MPs, for business leaders, even church leaders to come together and urge Metgasco to abandon its reckless plan. Metgasco may be able to secure the bare legal approvals from a compliant state government, and it may have contractual rights to access some farms in the region, but to what end? Socially, politically and commercially, it can’t end well and its time for Metgasco to do the right thing and develop an exit strategy.

The people who are caught up in the most difficult position are those landholders who signed up to access aggreements with Metgasco several years ago. These people have ended up as the meat in the sandwhich between a united community and a desperate company. In the interests of finding a peaceful way forward its important not to demonise these people who may be our long term neighbours or family friends and who now risk becoming just another casualty of the gas invasion. Some people signed up several years ago as the negative impacts of unconventional gas industry were just coming to light and before many people understood the massive scale of the industrial infrastructure that a mature gasfield involves. Some landholders even felt under pressure because the law gave them few options to resist the companies.

If we are to resolve the impasse between the communities of the Northern Rivers and the embattled resource speculation company Metgasco, a key ingredient will be the need to find ways to help landholders to extract themselves from onerous access aggreements that they may have signed and may now regret. If Metgasco does not agree to release landholders from their obligations voluntarily then our governments, local politicians and community leaders will need to offer support to broker a solution. Its urgent to again redouble our efforts to convince our state pollies in particular to move towards a permanent peaceful settlement for the Northern Rivers.

Of course Metgasco has another option, it can always chose to belligerently proceed with its ill fated and high risk proposal to spend its last remaining cash reserves on forcing its way into Bentley. The only thing that the battle of Bentley would not be is socially divisive, make no mistake Metgasco, the community is united on this one.

Perhaps it’s a fantasy, perhaps its visionary, but in recent weeks I have found my mind searching for an end to the conflict brought on our community by the gas invasion and struggling to find a path forward that is peaceful and positive. Lets envision a positive outcome and lets then take action and urge our local politicians state and federal, and even Metgasco to do the right thing, respect the clear wishes of the overwhelming majority of the residents of the Northern Rivers.

Published in the Nimbin Times, January 2014