The power of locking your gate 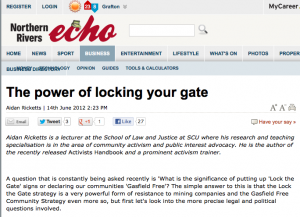 Reprinted from The Northern Rivers Echo.

Aidan Ricketts is a lecturer at the School of Law and Justice at SCU where his research and teaching specialisation is in the area of community activism and public interest advocacy. He is the author of the recently released Activists Handbook and a prominent activism trainer.

A question that is constantly being asked recently is ‘What is the significance of putting up ‘Lock the Gate’ signs or declaring our communities ‘Gasfield Free’? The simple answer to this is that the Lock the Gate strategy is a very powerful form of resistance to mining companies and the Gasfield Free Community Strategy even more so, but first let’s look into the more precise legal and political questions involved.

Ask a lawyer if locking the gate will make it impossible for mining companies to access your land and they will most likely give you a technical answer that goes something like this. Locking the gate and refusing access can keep mining companies out for a while but they do have special rights granted under the relevant legislation to force a landowner to arbitration and ultimately to court to effectively force access. At first blush this is pretty disturbing information and can cause many people to feel as though resistance is useless, but resistance is not useless – it is very powerful and here is why.

The law does not exist in a vacuum. It is created and maintained by the political process. Lawyers have a professional responsibility to give accurate advice to individual clients about their individual rights. Unfortunately, taking a purely individual approach can run the risk of missing the very real social and political context of disputes like the current one over unconventional gas mining (coal seam and tight sands gas). It is a political dispute involving large numbers of people and when large numbers of people stand together in solidarity the context within which the law operates changes significantly.

If a single landowner refused access on their own, a determined mining company could force access by the means outlined above or simply step around them by gaining access to neighbouring properties. But when hundreds of landowners in a community, and particularly where all of the landowners refuse access then the mining company is faced with a rapidly diminishing return if they try to force access into that community.

The political and economic cost of launching numerous individual actions against landowners would inevitably cause a tidal wave of political backlash. Thus the real question is not what happens when one farmer locks the gate? But what happens when hundreds of farmers lock the gate? It’s a simple thing called solidarity and it’s been used to great effect throughout history. Think about the first trade unionists. For any one individual, refusing to work was a breach of their employment contract, but when hundreds of workers went on strike together it became politically impractical for employers to sack them all or to sue them all. We know the rest of the story, laws changed, rights were achieved and workers now enjoy many benefits as a result.

It’s true that the laws related to mining and petroleum extraction appear to be severely stacked in favour of mining companies and against individual landowners.

When an imbalance like this occurs it represents a political failure by our parliaments and legal system. This political failure is why solidarity based strategies like “lock the gate” are needed in this campaign.

But there are still some important limitations to the strategy of locking the gate. Because it’s a strategy based on private ownership rights, there is a danger that mining companies may be able to divide and conquer by playing one landowner off against another.

This is where the Gasfield Free Community Strategy kicks in. Communities throughout the Northern Rivers have begun declaring their roads closed to mining companies and registering their road declarations with the Mayors. The Gasfield Free Community Strategy overcomes the limitations of the individual lock the gate strategy. It takes resistance from the farm gate to the whole of community level, it aims to protect both private and public land and it resists all activities of miners, not just drilling and fracking. It means that the front line of resistance moves from your front gate to the frontiers of your community, and that you and your neighbours have agreed upon mutual assistance.

Actually, it’s not that different to the way we all work together to fight other external threats like floods and bushfires.

Once again in pure legal terms, declaring your road ‘Gasfield Free’ has no formal legal status, but it is far from being merely symbolic, it is a powerful political action taken by communities to commit themselves to stopping unconventional gas mining in their community. The political power of this approach is enormous. These declarations are based on real neighbour-to-neighbour consultation and reflect extremely high levels of community consensus as well as a real commitment to action.

So what happens where mining companies try to ignore these community declarations? Mining companies may aim to symbolically break the will of communities by going in regardless and requesting police assistance to force their activities upon the local people. We saw this in Kerry (SE QLD) last year, but what we also saw was that the gas miners lost more than they gained. They gained a symbolic victory over a single blockade but at an unsustainable political cost.

In a nutshell the problem for industry in breaking blockades is that even when they win on the ground they will lose in the court of public opinion. This is especially so if communities behave in a disciplined and non-violent way and respect the difficult role of police in these situations.

Hopefully the need for blockades can be avoided if politicians listen to the voice of united communities and intervene to protect them from unconventional gas mining, but this is not where we seem to be headed at present. The community is presently doing all it can to have its voice heard.

If 7000 people on the streets of Lismore and a looming public poll does not wake up our politicians then communities may be forced to defend themselves. As the CSG Free Northern Rivers banner says: “Our resistance is non-violent but non-negotiable”