Round Three in the battle to save our native forests

On February 10, 2015 · 1 Comment · In Commentary
The North East Forest Alliance (NEFA), remembered for their unswerving campaign over many decades to protect the old growth and high conservation value forests (HCV) of NE NSW has fired a first shot over the bow of the state government in what is set to become round three of the historic fight to save our public forests from unsustainable logging. 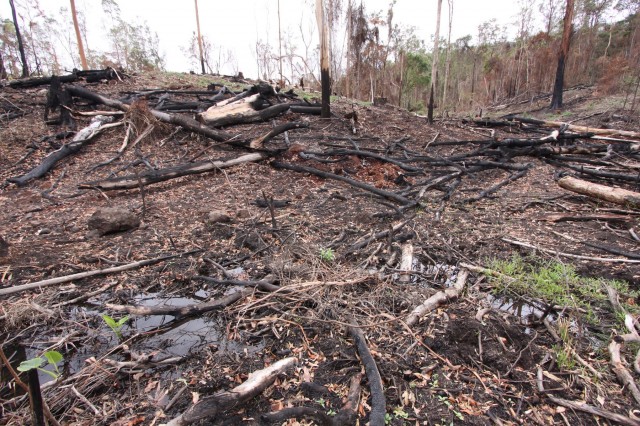 Whilst the Terania and Nightcap campaigns led to the historic protection of rainforests in the region in the 1980’s, it was NEFA’s campaign in the 1990s and 2000’s that led to over a million hectares of old growth and HCV forest being protected from the ravages of an unsustainable timber industry. NEFA’s battle to save the old growth involved over a decade of blockades, eight successful court cases and culminated directly in the resignation of then Liberal Premier Nick Greiner over allegations that he had improperly secured the vote of a key independent to pass pro-logging legislation. Following a full scientific assessment of forest values by the incoming Carr government a series of reserves was set up to save the last of the best. The political compromise at the time was that logging would continue in other state forests under Regional Forest Agreements that provided government-backed guarantees of timber supply that were knowingly unsustainable. In the years that have elapsed we have what remains of the industrial logging sector in NSW hammering our state forests to extract a dwindling resource at ever increasing cost to our forests, and heavily subsidised by taxpayers to boot. Over the past 12 years taxpayers have forked out over $12 m to logging companies to buy back timber allocations that never existed, and that’s in addition to up to $15m a year in direct subsidies to the Forestry Corporation to cover its losses.

Overcutting and systemic disregard for environmental regulations has prompted NEFA to draw a line in the sand and commence a new campaign for a complete end to native forest logging on public lands by 2018 at the latest. This creates a 3 year time frame for industry transition and for what is likely to be a tough campaign against the vested interests.

The role of forests in sequestering and storing carbon has become far more important and massively more economically valuable, as well as their function in maintaining stable water flows over changing seasons. For our wildlife, every bit of contiguous forest counts, and the survival of just koalas requires the immediate preservation of very large areas of threatened forests between Sydney and the QLD border.

Whilst the state opposition has recently embraced NEFA’s call for a Great Koala Park if elected, the chances of an upset win in the coming state election remains uncertain. The record of the current LNP state government is nothing short of appalling, having presided over 4 years already of non-enforcement of logging regulations, proposals to introduce hunting and even logging into National Parks and most recently the outrageous proposal to commence highly destructive cable logging on extremely steep slopes in a desperate attempt by the industry to grab previously inaccessible timber. Proposals to introduce extreme new extraction technologies such as cable logging are symptomatic of a desperate industry in its dying days, and a government of environmental vandals. The soil erosion alone associated with cable logging would do massive damage to coastal river systems.

Here in the Far North the picture is even more grim with vast tracts of state forest threatened by logging induced dieback. (see photo) If the logging isn’t enough, once forest areas are disturbed by logging, lantana infestations often follow which encourage colonisation by bellbirds that farm an insect pest (psyllids) that cause the death of the remaining trees over time. Over 100 000 ha is already seriously effected with up 2million ha remaining vulnerable. State forests have known this for years but have failed to ever address the causes of dieback.

So the fight is well and truly on again for our native forests and NEFA with its proven track record are letting the state government know that they have 3 years to recognise the true value of native forests on a planet in crisis. The ALP plans for a kola park are great but will only come to fruition if there’s a change of government in March, if not then it is game on for the whole of the next political term.

Our battles over gasfields were very much about our water resources and so is this battle, we all know that forests provide the best form of catchment for creeks and rivers, for our farms and town water supplies so we all depend on them, the fact that we also need forests for carbon storage and that our endangered species hang on a knife edge are all reasons to make a clean break and save our native forests forever.

To find out more, offer your support or follow the action go to
nefa.org.au
https://www.facebook.com/NorthEastForestAlliance
or contact : Susie Russell