On March 9, 2015 · Leave a Comment · In Commentary
Despite the prolific hot air surrounding the release of the NSW government’s gas plan late last year, the renewed threat of gasfields across the region remains a very real prospect. In classic double speak we were told last year that the gas plan would lead to the cancelling of licences within the very same week that the state government actually renewed the largest of the regions exploration licences, PEL 445. 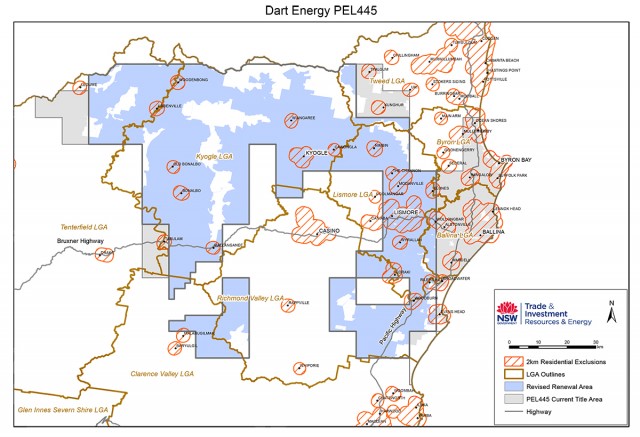 Despite a small reduction in overall size PEL445 still covers a huge amount of the region, stretching from Woodburn in the south, east as far as Clunes, North to the QLD border, west past Mallanganee and encompassing nearly everything in between. Add to that the exploration licences still held by Metgasco and you can include Bentley, Casino and large parts of the Clarence valley. The area to the east around the marginal Ballina electorate that were withdrawn from PEL 445 still have no permanent protection and could be re-issued with the stroke of a ministerial pen after the election.

Meanwhile we are seeing a massive ramping up of coal mining over agricultural lands and forests under the Baird government, including on the Liverpool plains, Maule’s Creek and a leaked massive expansion of mines in the Upper Hunter.

Someone in government has clearly been drinking too much of the gas industry Kool-Aid. The economics of the gas industry have dived recently with the drop in the global oil price, and coal is in terminal global decline for good reason. The Santos project in the Pilliga has seen a massive write down in value, the major LNG projects in QLD are running perilously close to a break even net back price (export price minus production costs) and the temporary jobs peak in QLD gas towns like Dalby and Chinchilla has come to an end with major axing of gas jobs in those towns in recent weeks.

The methane bubble is hissing loudly, and the QLD gasfields are set to enter phase two of gasfields industrialisation, the bit where the jobs vanish and the towns and regions are left to cope with the toxic aftermath. Unfortunately for southern QLD their region will now have a future as the ‘laboratory of impact’ as the legacy of fracking can finally be studied complete with its bubbling rivers, fugitive emissions and inexplicable health problems for the locals. Oh joy what will we see 50 years of scientific studies into the ‘unforseen’ impacts?

This the future our Northern Rivers community has worked hard to avoid, and so far successfully, but there is no word short of betrayal to describe a government that simply won’t listen to over 85% of the region when we say we don’t want our farms, our tourism and our health ruined by an economically illiterate gas rush.

Nonetheless our current state government and its local MPS continue to try to sell the apocalyptic vision of gasfields to our region. If you live in Lismore, Nimbin, Kyogle, Woodburn, Clunes, Casino Grafton or environs then your valleys are still earmarked for gas exploration, if you live in Ballina, Byron or Murwillumbah then you are only one stroke of a ministerial pen away from the whole drama starting again. In any case, as a region we stand together, we share our water table and our rivers, we share our tourism and agricultural industries and we share our rejection of politicians that defy the popular will.

Elections as we know are unpredictable things, and real democracy is about so much more than elections. Despite our best efforts we may wake up after the election to another four years of mining under martial law, so it’s important to keep building our local resilience and our broad based social movement. I was at Coraki last weekend for their Gasfield Free Community declaration, congratulations to Coraki and Box Ridge communities and the 82.5 % who want to remain gasfield free. The gasfield free communities movement is the lifeblood of our region’s self-defence. As we have seen time and again, organising your neighbours together to complete the gasfield free survey and declaration is the best protection a community can invest in.

This article was first published in the Northern Rivers Echo, March 5, 2015.