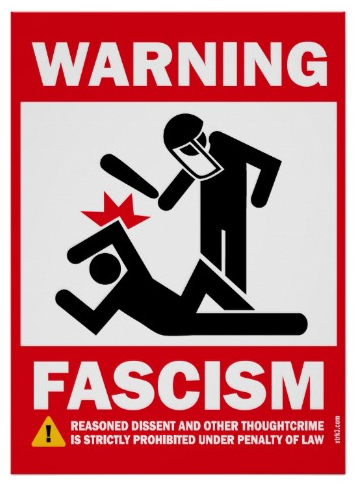 Everywhere we look at the moment the neo-conservative assault upon democracy is in full swing. It would be an understatement to say we are in the throes of early onset fascism, it’s worse than that, it’s rapid onset fascism.

The Abbott government is undoubtedly the most aggressively anti-democratic federal government we have ever seen in this country, and the conservative states including NSW are also fellow travellers.

Where to start? Our refugee centres in Nauru and Manus Island deserve their full title, they are nothing less than concentration camps. Places where vulnerable ethnic minorities are rounded up, detained and systematically abused. We are talking real abuse, mental, physical and sexual and our government’s response is to pass laws to imprison health professionals who tell the truth about it.

The government is cynically escalating its involvement in Middle Eastern wars in order to distract attention from its harsh, unfair and utterly dysfunctional domestic policies. Money and services are being ripped away from the most deserving whilst the cigar smoking treasurer proposes more tax cuts for the rich and multi-nationals are allowed to get away with paying no tax.

The Attorney General is hell bent on attacking and silencing any remaining bastion of civil society with the hide to criticise the government. The ABC and SBS were easy targets. True to form for fascists the hit list just keeps going though, the Environmental Defenders Office was defunded and environmental groups that millions of Australians support and donate to are having their tax deductibility status attacked.

Even the rule of law is copping a bruising. The Human Rights Commissioner has been vilified just for doing her job, the Federal Court is being criticised for not towing the coal industry line, and we have serious questions about the impartiality of the Royal Commissioner employed by the government to conduct a trade union witch hunt.

In a longer term attack on democratic sovereignty, the government is pursuing the Trans Pacific Partnership agreement to give multi-national corporations a power to sue Australia if we ever have the audacity to make changes to our laws that hurt their business interests. Sovereign risk, it’s the corporate word for democracy.

Then there is the fossil fuel industry, that good old boys club that has run our parliaments for over 60 years thrashing around like a cornered snake. It is not only democracy that has become a target of the fossil fuel lobby, now it’s even pitting itself against the rule of law. The Federal Court had the audacity to strike down a coal mine approval that was unlawfully issued by the federal government and so now the government wants to fiddle with the procedural rules to prevent genuine community and environmental groups even having access to the courts.

What a bizarre creosote republic Australia has become. The rest of the world looks on astounded as our government, completely controlled by the coal lobby, resists action on climate change, subsidises fossil fuels, punishes renewables, pushes for the creation of giant new coal mines and shrieks about green vigilantes.

What’s happening in the conservative states? NSW is introducing Ag-gag laws to punish anyone who produces evidence of animal cruelty in intensive livestock installations, Tasmania has laws to imprison protesters who gather outside businesses, WA has proposed anti-protests laws to target peaceful; blockaders who use lock on devices, Mike Baird has promised a new wave of anti-protest laws in NSW.

We are faced with very real rapid onset fascism in this country. The sickly combination of fuelled up racist and national security rhetoric, attacks upon democratic rights and civil society organisations, backlashes against court decisions, and clear advocacy on behalf of a heavily subsidised mining industry, it is all laid bare.

But all is not lost. Civil society is fighting back. We need more than ever to put our weight behind our trade unions, our environment groups, our community organisations, and our progressive political parties. This extremist government is actually in a state of utter chaos, their policies just don’t make sense, not even to mainstream Australia, not even to most rational business people.

The Abbott government may have done us a favour. It may have revealed for a whole generation to know the true irrational anti-democratic underbelly of the Liberal National parties. Just as Campbell Newman did in QLD. Politics has changed, there are no longer two major parties of the centre in Australia, there is only the anti-democratic pro-corporate, pro fossil fuel LNP, and the conservative but rational Labor Party or the genuinely progressive Greens.

You don’t get to choose whether you care about politics in times like these, it’s become a matter of survival to get active, find the activists and the organisations that are fighting and help out, donate join in and kick this mob out.