On September 7, 2014 · 2 Comments · In Commentary
Profit vs Democracy: The Age of Corporate Entitlement. 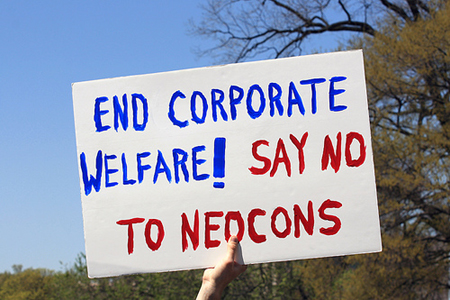 How dare Metgasco seek taxpayers money from the government to ‘compensate’ them for their own poor business judgment? What an outrageous sense of entitlement it reveals. Whatever happened to the old idea that businesses made profits partly because they took risks. This insidious idea that speculative companies have some right to be compensated for democracy has to be resisted, and we should all call on the state government to stand strong and refuse to bargain with Metgasco.

The idea of mining companies needing a social license is not new. The giant international company Arrow Energy, a joint venture of Royal Dutch Shell and Petro-China was very quick to form the view that the Northern Rivers was not a place where its unconventional gas business was ever going to succeed, that was a sound business judgement to make.  So by what alternative universe of business logic did Metgasco keep blundering in, spending its money and ignoring community opposition. What was ever ambiguous about a poll showing 87% opposition to the industry?

Unfortunately, the state government only has itself to blame for finding itself in a legal conundrum. In May 2014, just weeks before the Bentley suspension they foolishly removed legislative provisions in the Petroleum (Onshore) Act 1991 that gave the government power to cancel petroleum (gas) exploration licences  without compensation on public interest grounds. There is no way Metgasco could be suing now if that provision was still in place. We all need to ramp up pressure on the state government to cancel Metgasco’s licenses once and for all, and to do it with fresh legislation if need be.

If Metgasco is given a wad of taxpayers dollars it will be a disaster for the region and disaster for democracy. For one thing, Metgasco currently has very few cash reserves left to keep up its invasion of the region.  Left to their current business model the company will simply run out of cash eventually and go the way of so many speculative companies. What an affront to democracy if their war chest was to be  articificially inflated with taxpayers money. Are taxpayers expected to fund the company as well as the police operations the company needs to force its way in here?

More importantly we need to resist the whole bigger picture of corporate entitlement. Companies do not deserve to be compensated for democracy. Yet we are seeing increasing pressure for taxpayers to underwrite business risk. The Trans-Pacific Partnership Agreements that are currently being negotiated and much of the practices of the World Trade Organisation are geared toward the corporate agenda of requiring compensation for democratic decisions that upset profits.

Democracies are constitutional forms of government in which government is meant to be an expression of the common will of the ‘people’. If the people require change and its hurts some company’s profits, it’s just another type of business risk, it’s normal. Corporations have a name for democracy, they call it sovereign risk, and there’s nothing wrong with a bit of healthy sovereign risk.

The ‘sovereignty of the people’ means real flesh and blood people, not  corporations.  Corporations have no heart, no soul, no children and no grandparents. They do not breathe air or drink water and are not bound by the natural laws of physics.  They are a lawyer’s device for facilitating the raising of capital and the conduct of profit making business and at that task they are remarkably successful.

As flawed as people can people, we at least have a conscience, and a capacity to act unselfishly at times, it’s called a moral faculty. Corporations by design have no moral faculty they have in its place a legally mandated duty to pursue maximum value for their shareholders.

That’s fine, they can keep pursuing their profits but we must not allow them to take over our democracy.

This article was first published in the Northern Rivers Echo 4 September, 2014

2 Responses to When profit trumps democracy