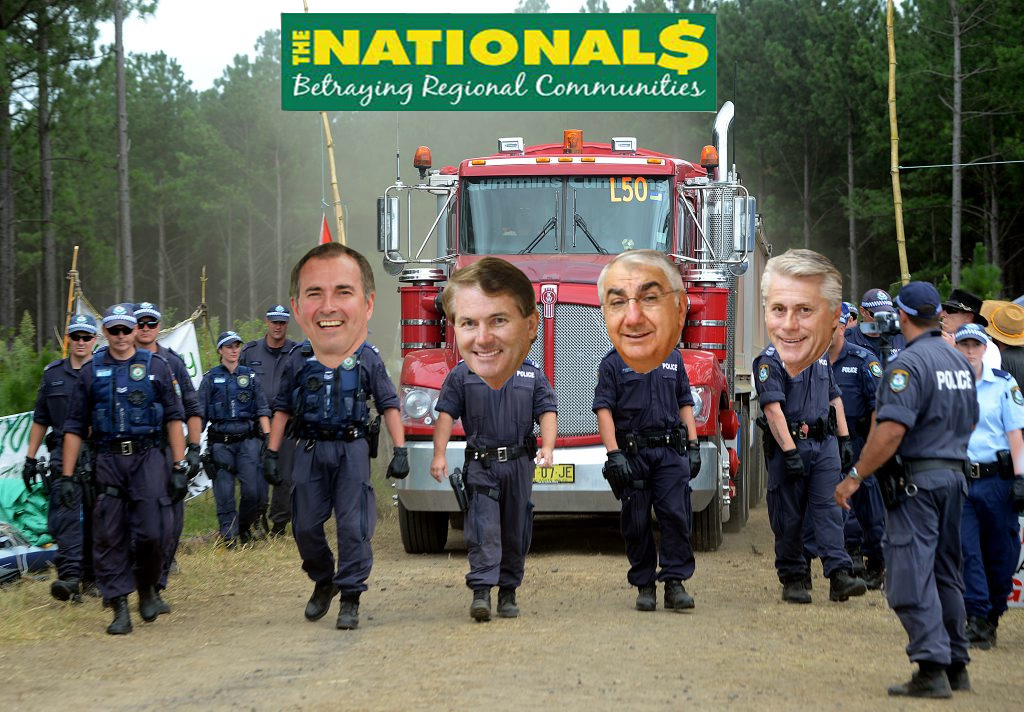 The Bentley blockade is proving to be so much more than a protest against a drill rig. It is one of the biggest and most significant outbreaks of democracy seen in this country for many decades.

It is the physical manifestation of a truly matured social movement that has mobilised majority support, achieved an impressive level of self-organisation and quite apart from its role as a protest has become invaluable as a place where the community comes to learn, to discuss and to rediscover our power as a united community.

Thousands of people, many of whom may never have attended a protest before let alone a blockade have begun the journey from passivity and into active citizenship. For many it is a chance to meet the protesters, and the blockaders, who have for so long been portrayed by media and politicians as a separate species and realise they are us and we are them. We are the protectors.

But beyond the amazing cultural transformations that are taking place at Bentley there is of course a deadly serious political reality.

Our democracy is in crisis.

Our state government is riddled with corruption. We have watched over the last several years as the Independent Commission Against Corruption (that remaining bastion of transparency) has revealed the tip of the corruption iceberg in this state. Both Labor and the Liberal and National parties have been shown to be captured by vested interests in the form of the mining industry and other developers. Finally we can all see exactly who has been running this state; why gas and coal licenses have been granted and renewed with no regard to community consultation, environmental safety or proper process.

From Maules creek to Bentley and from the Pilliga to the Illawarra communities are standing up and fighting back against the mining behemoth. Communities that have exhausted every conservative avenue for being heard, that have voted, marched, written to politicians, and participated in protests or appealed to the courts have all hit the same brick wall. The state government responds by backing the industry every time. Even when the tiny town of Bulga beat the mining companies twice in court, the state government simply changed the legislation for the mining companies. Is it any wonder that formerly conservative communities all over the state have reached the same conclusion, there is nothing left than community led non- violent direct action.

Non-violence is so powerful for communities because through it we can assert our true political power without giving the government an excuse for the violence they would meet us with.

Nevertheless our government at this time is busy developing its most absurd plan yet. To raise a force of over 700 police on an 80 day deployment to force mining by martial law upon the communities of this region. Apart from the fact that such a plan can never succeed against a united community, it represents a massive subsidy to Metgasco of over $3 million of public money just to get one drill rig in.

To the people of the region, have pride, be courageous and know that we are winning. The greater the force that the government uses the more it exposes the corruption of our states politics and the sheer impossibility of Metgasco’s business model. Over coming weeks the government must decide whether it really wants to go ahead with its crazy military plan.

In the meantime we have nothing to fear, we need to keep visiting Bentley, keep enjoying our dawns, keep encouraging our friends and work colleagues and neighbours to make history with us. Whether the government backs down first or whether they go through the insanity of sending an invasion force for us to peacefully absorb, Bentley has already earned its place as a great stand for democracy.

The only thing that could defeat us in the coming weeks is complacency. Stay alert, keep visiting the blockade and keep your affairs in order so you can respond when called. Above all remain calm and peaceful in all your interactions with police, because for the vast majority of them as well their heart is not really in this madness. Do visit www.gasfieldfreenorthernrivers.org and DO send a text to 0447 399 535 to get yourself on to the red alert notification line.