Political donations the essence of corruption 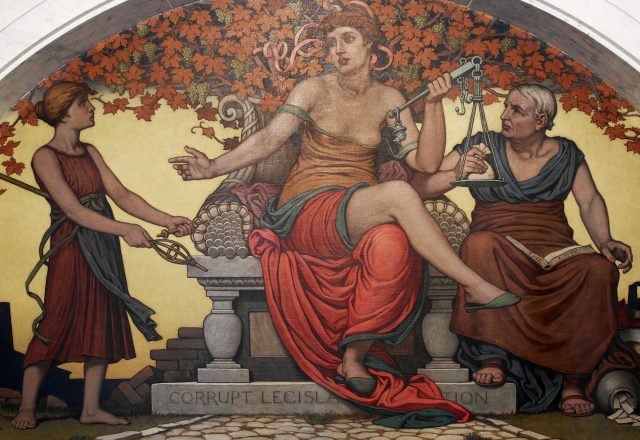 Corruption is an imprecise concept. At its most obvious it about under-the-table bribes to secure specific outcomes, but that is just the tip of the iceberg of practices that corrupt our political system. Corporate donations to major political parties is one of the most pervasive corrupting influences in Australian politics.

Globally and nationally corporations have learned how to manipulate two-party electoral systems through donations to both sides. We could look at armaments, pharmaceuticals, chemicals, alcohol or tobacco, but the big smell of corruption across Australia right now involves the pernicious influence of the mining and fossil fuel industries across all of our parliaments. The influence bought by political donations is scarcely even hidden. The two most recent federal resources ministers from Labor and Liberal (Martin Ferguson and Ian Macfarlane) have political careers inextricably linked with work as mining and or gas industry lobbyists. The current CEO of the NSW Minerals Council was previously Mike Baird’s advisor. The recent anti-democratic protest laws introduced in NSW were promised to the mining industry by Premier Baird at a pre-election mining industry dinner held late in 2014. 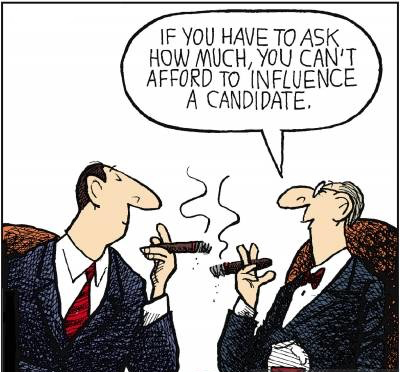 Major political parties (LNP and Labor) have received $3.7m in donations from fossil-fuel companies since the last election. This money resurfaces in a myriad of ways: flawed systems of mining approval at the state and federal level; anti-protest laws in several states; a bewildering variety of hidden subsidies and finally in deliberate inaction on the need to reduce fossil fuel consumption and export. Political donations are a small and high yielding investment for the mining sector. According to a recent 350.org report, governments in Australia will deliver $2,000 in subsidies to the industry for every dollar donated.

Our major parties are in reality miner parties.

Climate change advocacy organisation 350.org has launched a campaign for pollution free politics (www.pollutionfreepolitics.com ) and has developed a pledge that all electors can take to their local candidates ahead of the next federal election asking them to pledge their support for a ban on donations from fossil fuel companies, and a ban on subsidies to fossil fuel companies. So far all Greens members and Senators have signed, along with two lower house independents (Wilkie and McGowan) and two outgoing Labor members.

Greens Senator for NSW Lee Rhiannon also has a Bill before parliament seeking to ban political donations from the mining sector, but does not have support of either major party or enough cross bench Senators to get it passed.

Political donations, particularly from the mining sector, but corporate donations generally, remain a burning issue as we hurtle towards a federal election and one of the most important things we can do is let our candidates know that their stand on mining industry donations can change the way we vote.

The Lock the Gate movement has been so much more than a social or environment movement. From the moment it began to seriously challenge the unfettered control of the mining industry over our parliaments, Lock the Gate became a pro-democracy struggle. This has been made all the more obvious by the recent spate of anti-protest laws in NSW and other states and moves by the federal government to starve advocacy groups like Lock the Gate of charitable fundraising status, and to limit access to the courts for groups challenging mining approvals, and the de-fund the Environmental Defenders Office. 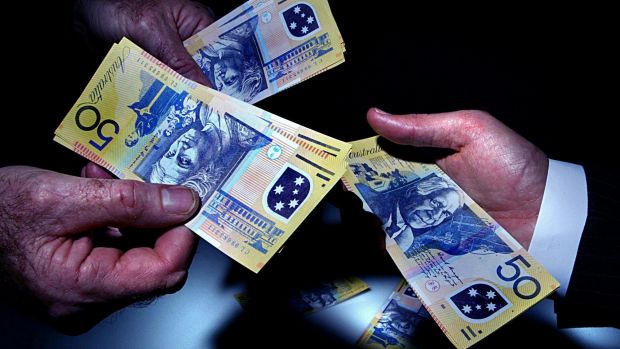 The mining industry word for real democracy is sovereign risk. The industry has an appallingly bad human rights record in Africa, West Papua and Asia, where murder of activists is common. In countries like Australia, US and UK, the preferred method of political control has been through political donations. What Australia badly needs is a formal separation of mining and the state, and this can only be achieved with a long campaign. We need to take every opportunity to educate people about the corrupting influence of corporate and mining industry donations and about the fact that change is possible and that there are parties and candidates who do not receive mining industry dollars.

Elections are only a part of a functioning democracy it’s true, but they are a good opportunity to pressure local members. Both Northern Rivers federal seats of Richmond and Page are marginal, which means as a region we have some power to exert.

Contacting your local candidates and finding out where they stand on mining industry donations, subsidies and donations reform is a great place to start, as well as letting them know that their answers to your questions will influence how you vote.

You don’t have to vote for the miner parties.