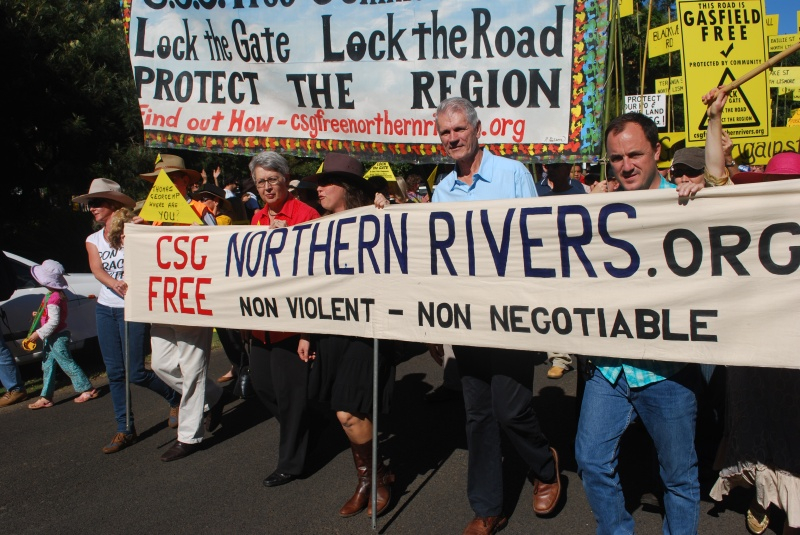 Many of us are dissapointed but not really surprised that the NSW government has seen fit to ignore the massive majority 87%  who voted NO to CSG last weekend. Within days of that historic vote the government has turned around and renewed 23 expired exploration licences, issued a production license in the Northern Rivers and lifted the moratorium on fracking.  They have shown their complete contempt for the expressed wishes of the people and proven once again that our parliament is captive to the mining industry.

Pre-election promises have been broken, farmers have been betrayed and prime agricultural land has been exposed to the risk of being turned into poisoned industrial gasfields. Until this week the NSW government could realistically argue that the previous labor government was responsible for the proliferation of exploration permits, but in a single move, by renewing 23 expired leases Barry O’Farrell’s government has taken on direct political responsibility for  the whole  CSG debacle in NSW. The National Party has abandoned and betrayed farmers and has betrayed the NSW Farmers Association on a grand scale. There will be a price,  87% of the Lismore LGA voted No to csg mining, the state seat of lismore recorded a 74% two party preferred vote for the Nationals just last year, on the most conservative calculation nearly two thirds of the people who voted NO to csg last saturday  were national party voters. They have been treated with utter contempt by the likes of Thomas George, Don Page, Chris Gulaptis and Geoff Provest.

The government is hoping this decision will be a crushing psychological blow to the massive anti-csg movement, it is certainly dissapointing but hardly crushing. It merely confirms what we already knew, that we are faced with an historical political failure at all levels of government in relation to CSG (and other unconventional gases).We now know that we can’t rely on normal political processes (polls, letters, submissions, lobbying) to win this fight, this fight requires people power and peaceful direct action.

The Northern Rivers has not been idle these last few months, we have been building a social movement  house by house, road by road, valley by valley, across our region and beyond. We have been building gasfield free communities and preparing ourselves for this invasion of our region. As our Mayor has said, “This is the greatest threat to our region since World War Two.” This is not just the fight of our lives this is the fight for our lives. The NSW government had a choice on how to respond to our campaign and they have chosen the hard path and the CSG industry will face an operating environment that no sensible business would contemplate, a long slow economic suicide by a thousand cutsand unending community opposition.

This is the beginning of the fight we expected but hoped we would not have to have.

The anti CSG movement is the most broadly based, mainstream and popular social movement in living memory, you don’t see figures like 87% very often. What is more we are prepared to fight this with people power, with civil disobedience and by way of peaceful direct action. The Northern Rivers already has a proud tradition of strong direct action from the days of Terrania Ck and lets never forget that it was the Northe East Forest Allaince campaign which ultimately brought down the Greiner government (The Metherill affair). The forest movements were powerful but they were far short of having the massive overwhelming levels of support we have to fight CSG. For this campaign farmers, workers, town residents, greenies, traditional national party voters and many more have all joined together to secure our common future and to protect our beautiful region from being turned into an industrialised wasteland.

The government’s recent  decsion is not a defeat for us, it is only the start of this government’s war with its own people. I feel great sympathy for the local police who will end up as the meat in the sandwhich in this struggle, we know they were among the 87% and it is important that in the days ahead we respect what a terrible position the government has placed them in.

We are living in difficult times and we have to accept that the path ahead will not be easy, and we can’t expect that the job will be done for us by others. Everyone will be needed to put in what they can. We may not all be prepared to be arrested, but we can support those conscientious objectors who will be.

Go to the website www.csgfreenorthernrivers.org to learn more about how to organise your community to fight unconventional gas development, or attend local community events or one of the activist training workshops that are run regularly.

Organise in your local community and be prepared to offer assistance to any other community that needs you and above all, stay positive, stay hopeful and enjoy the ride. Working together for our community is one of the most joyful and sustaining journeys we can embark upon.

One Response to NSW government mere puppets of gas industry