Judging by the recent rash of blistering attacks from resource industry lobby groups against anyone who dares to question them, the industry is very much in attack mode.

The writing is clearly on the wall for the fossil fuel sector. Climate change is real to 97% of reputable scientists, China is winding back on coal consumption, and investment funds around the world are now taking the approaching carbon bubble seriously. Those left holding coal assets in the near future will be rushing for the door. 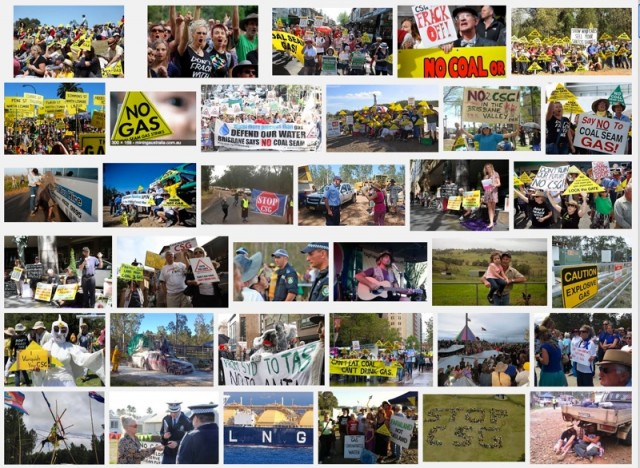 Yet in Australia we find ourselves living in an intellectual backwater where our federal government, dominant newspaper group and the fossil fuel industry are waging a rearguard propaganda war to deny climate change, subsidise fossil fuels, demonize renewable energy, and publicly attack anyone who dares to protest.

Just last week the Daily Telegraph and the Minerals Council launched a self contradictory tirade against a target list of coal and gas activists. Unsurprisingly, a number of local identities were on the list.

We have heard it all before, if you live near a mine and protest you are a NIMBY (not in my backyard) if you don’t’ you are a blow-in. If you don’t have a job you are an unemployed feral, but if you do you are a professional protester. That’s before we get to the more ridiculous labels like extremist and terrorist.

The mining industry is no friend of democracy. The industry a long history of human rights abuses across the globe in places like Nigeria, PNG and West Papua. In more stable countries like Australia we see the political donation and corruption scandals that engulf the major parties and a revolving door between mining lobby groups and former politicians.

The mining lobby have a name for genuine democracy, its called ‘sovereign risk’, the risk that the population may awaken to the scale of unnecessary social and environmental impacts associated with an industry past its use-by date.

Finally there’s the fallacious hyprocrisy argument. Apparently anyone who is an energy consumer is a hypocrite if they advocate for reform of the system they are caught up in. Surely responsible citizenship would demand that as energy consumers we have a responsibility to support policies to transition us to a sustainable footing.

The argument over fossil fuel is not about what fuel we use today in our homes, it’s entirely about what we are investing in. Todays investment decisions are tomorrows economy, and this is where the fossil fuel lobby is losing every rational argument.

The problem for the fossil fuel sector is that its entire business model is becoming redundant. It relies on the assumption that energy requires fuel that can be dug up, shipped or piped, but most importantly fuel that can be owned. We have fought so many wars over the control of fuel. The revolutionary potential of renewables, is the fact that the ‘fuel’ is abundant and nobody has a monopoly over it.

“I am a very law abiding grandma. I wouldn’t even jay walk” ~ Sharyn Munro, locked to an AGL gate in Gloucester, NSW.

What we are now witnessing is increasingly shrill attacks on citizens who protest and legislation to severely hamper protest. If fossil fuels really were the way of the future the industry would be secure no matter how much people protested, the problem for the industry is that their days are numbered, the coal price is collapsing, solar in particular is surging ahead with or without government support, and mining industry subsidies are under the political spotlight ($4 billion annually in Australia last I checked.)

Attacking protesters and spending big on manipulating democracy may buy the industry small amounts of time but it can’t alter the science, or fortunately even the economics.

Protesters are an essential part of a healthy society, they sound the warning bells when we are heading in the wrong direction. It just so happens that the ranks of ‘protesters’ now include farmers, scientists, townspeople, just about everybody but the resource industry and their political backers.

This article was first published in the Northern Rivers Echo, 4 December, 2014.