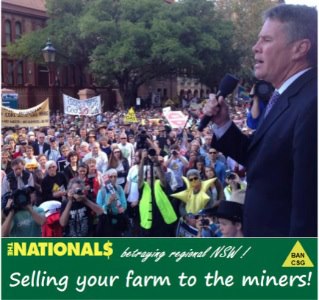 The National Party is positioning itself to be demolished by anti csg rural independents, and Country Greens candidates at the next state poll. The National Party had been in historic decline for decades in NSW (and nationally) despite a temporary reprieve at the last state election.  Election analyst Antony Green has observed that the decline for the Nationals is long term and that each time there is a peak in the National Party vote it is smaller and delivers less seats than the last peak. http://blogs.abc.net.au/antonygreen/2009/08/the-decline-of-the-nationals.html

Another key problem for the Nationals in recent decades has been the loss of seats to rural independents, and the tenacity of rural independents once elected to defend their hold on rural seats. The 2011 NSW state election provided temporary relief for the Nationals only because the scale of the anti-labor swing was so great that it allowed the Nats to win back a swathe of seats it had lost to independents over many years. The National Party is deluding itself if it thinks these seats will survive its recent betrayal of rural NSW over the issue of CSG mining.

The real risks that CSG and other unconventional gas mining poses to rural Australia are well understood by farmers and regional communities. The evidence continues to mount that CSG threatens underground aquifers, will lead to significant drops in water levels in bores and has the capacity to poison underground waters making them wholly unfit for human or agricultural use. This is why we have seen the unprecedented alliance of farmers and their representative groups like the NSW Farmers Association, the CWA, rural industries like the NORCO dairy co-operative, winemakers and horse breeders and communities from the Tweed to the Illawarra and west to the Pilliga united in their opposition to csg. The only community to have been given a vote on CSG in the Lismore Local government area has recorded a whopping 87% against CSG. Some may like to pretend that Lismore is somehow different, and that it has more than its share of tree changers, but the facts speak a different story. Lismore has until now been a safe National Party seat at the state level, where the nats recorded a 2 party preferred vote of 74.4% at the last state election. On these figures, at the very least 61% of the voters in Lismore are National Party voters who voted NO to CSG in the council poll. Where do these voters go next election?

Under the policies recently unveiled by the NSW government, no areas in NSW are off limits to CSG mining, and there are few if any enforceable or independently monitored constraints on the gas industry, and a raft of untested chemicals will be allowed to be injected into underground water systems.  Farmers are being asked to trust the mining industry to self regulate, to self monitor and to make good damage caused by their activities. It is staggering to realise that under the new policies the government actually accepts that a 2 metre drop in water levels in bores is within acceptable levels and will trigger no barriers to continued expansion of the industry, drops greater than 2m won’t stop the industry either, farmers will just be asked to prove it and then seek compensation. The anger that will flow will be laid, quite rightly at the feet of the NSW National Party sitting members for their Judas like betrayal of regional communities.

Already the disquiet in local branches of the National Party is at boiling point and there is no doubt that the next election will see numerous anti csg candidates emerge, many no doubt will be former card carrying members of the National Party rising up to avenge this betrayal. The National Party will be under attack on all flanks from splitters from their own party, and from Country Greens who as the sole parliamentary party clearly opposed to CSG mining have been making many new friends in the country. Even the Labor Party has been let off the hook, and is now free to develop new policies that can contrast positively to the abject failure of the O’Farrell government in the bush.

All of this is not lost on the social movements opposed to CSG, and we have seen ongoing protests aimed at sitting National Party MPs, including one by the now internationally acclaimed Knitting nannas against gas targeting National Party minister Don Page. http://www.abc.net.au/local/audio/2012/09/17/3591888.htm?site=northcoast#.UFbeYWGMedc.facebook

It has also been revealed that NSW National Party minister Kevin Humphries has urged farmers to keep “locking the gate” to resist mining in the wake of the Governments toothless land use policy announcements. http://theland.farmonline.com.au/news/state/agribusiness-and-general/general/humphries-urges-csg-lockout/2624407.aspx

Urging farmers to risk being charged with criminal offences to resist the policies of the government you are a minister in is hardly a way to reverse the deep sense of betrayal in regional communities.

The historic alliance between farmers, greenies, tourist industry, horse breeders, wine makers and an ever growing number of regional and metropolitan communities is the largest, fastest growing and most well connected social movement in living memory. The NSW government has successfully attached its own fate to the csg industry and the National Party has been forced to make a choice that has been coming for decades, whether they are really aligned with mining companies or the rural communities that elect them, and they have chosen mining companies. The Nationals will be the biggest losers when voters get to voice their anger over this Judas act.