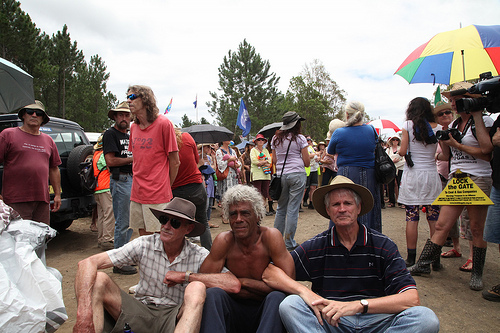 Life between elections, the gloves are off.

So the festival of democracy (the election) is over, we’ve all had our three minutes of vicarious power in the polling booth. Time to return to what passes for normal.

Representative democracy, the bit where we elect pollies, is very important, but it is by no means the greatest part of democracy. What happens in our community the other 364 days of the year is the true measure of the health of our democracy. The practice of democracy is much more about how society routinely respects our rights of self expression, association and protest between elections. Unless these rights are fully respected then we are floating somewhere between a true democracy and a mere elected dictatorship.

So I was delighted to see the Knitting Nannas resume their knit in for that gasfield free region that all the pollies seemed to believe in just three weeks ago (funny that). What a shame to see them mistakenly told their protest was ‘illegal’. So far in NSW there’s no such thing as an unlawful protest, provided you don’t do any specific acts that are unlawful under general laws.

But democracy is a fragile flower and sadly I have grave fears that our rights to protest are about to come under severe attack. Mike Baird hinted at a mining conference last year that there is draconian anti-protest laws planned for NSW. We just can’t have democracy getting in the way of the mining industry. The mining industry has spent too many years building up a cozy revolving door between the mining industry and high political office to have it all ruined by an endless parade of farmers, grannies, war veterans, musicians and citizens locking on to save their land water and air.

Conservative governments in other states have already led an assault on protest rights. First in Victoria we saw police given extraordinarily wide powers to disperse protests, in Tasmania now you can be jailed for protesting outside a business, and in Western Australia there’s new draconian laws against the time honoured peaceful tactic of locking-on.

Locking-on has a long and respected history. It was used by the well-loved suffragettes to gain the vote for women. Why should society in the 21st century be so much more draconian than in the 19th century? Locking on is peaceful and it avoids the temptation for crowds to muscle up against police to ‘hold the line’. We are heading for very dark days if we remove these simple and peaceful pressure valves from the body politic. Oh elections are such sweet fantasy, gloves are off now.

This article was originally published in the Northern Rivers Echo on 16 April, 2015.