On December 17, 2013 · Leave a Comment · In Commentary, Journal Articles, Publications 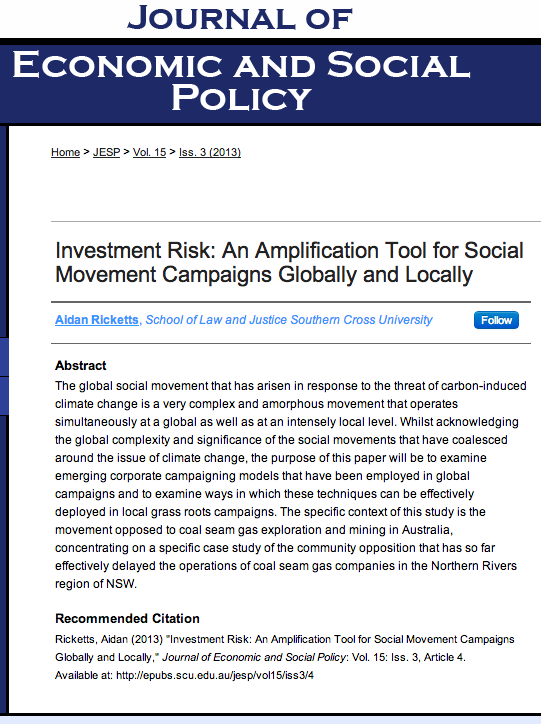 Article by Aidan Ricketts published in the Journal of Economic and Social Policy, Vol 15, Iss 3, 2013.

Abstract
The global social movement that has arisen in response to the threat of carbon-induced climate change is a very complex and amorphous movement that operates simultaneously at a global as well as at an intensely local level. Whilst acknowledging the global complexity and significance of the social movements that have coalesced around the issue of climate change, the purpose of this paper will be to examine emerging corporate campaigning models that have been employed in global campaigns and to examine ways in which these techniques can be effectively deployed in local grass roots campaigns. The specific context of this study is the movement opposed to coal seam gas exploration and mining in Australia, concentrating on a specific case study of the community opposition that has so far effectively delayed the operations of coal seam gas companies in the Northern Rivers region of NSW

The industry’s own risk analysis provides some useful insights into the impact of these grass roots movements. A 2012 report prepared for the unconventional gas industries by ‘Control Risks’, an industry risk consultancy group, observes:

As shown by local bans in the US and Canada, national moratoriums in France and Bulgaria, and tighter regulation in Australia and the UK, the global anti-fracking movement has mounted an effective campaign against the extraction of unconventional gas through hydraulic fracturing (‘fracking’). Meanwhile, the oil and gas industry has largely failed to appreciate social and political risks, and has repeatedly been caught off guard by the sophistication, speed and influence of anti-fracking activists. (Wood, 2012, p.1)

Significantly, the Control Risks report identifies locally based campaigns as a major threat to the industry noting that:

… … …
A key dynamic that the global risk report may have failed to detect is the sophisticated way in which the efforts of localised social movements are beginning to be amplified by an emerging tactic of engaging the investment community and specifically the way in which direct action and investment risk strategies can be deployed in a mutually reinforcing way (Carrick, 2013).

Corporate campaigning is not new for environmental social movements, it has been a growing phenomenon in various forms for at least the last 30 years (King and Soule, 2007), but what is changing is its reach and focus. As a technique it has matured from retail-based strategies such as public awareness campaigns and consumer boycotts (King, 2008), through to more sophisticated ethical investment campaigns (Vasi and King, 2012).

Social movement activity has been traditionally associated with and predominantly focussed upon engagement with public policy and state-based actors, but the prevalence of corporations as dominant governance institutions has necessitated a shift in recent decades that has seen social movements increasingly focus their activism upon private sector power holders such as corporations and, more recently, investment markets (de Bakker et al., 2013). This change in practice has also led to a corresponding emergence of theoretical analysis that brings together social movement theorists with business theorists and organisational theorists into what is rapidly becoming a merged field of analysis (de Bakker et al., 2013). Significantly, this shift in practice and theory has meant that in order to be able to evaluate the effectiveness of social movement activity there is a need to develop ways of measuring impacts on corporate targets.

Initially the adaptation of social movements from the public to the private space was characterised by the adaptation of familiar approaches to protest activity, emphasising the outcomes of ‘disruption’ and growing public awareness (King and Soule, 2007). But the mechanisms of responsiveness to pressure are different in the corporate context and so disruption is more effectively measured by its economic (rather than political) cost and public awareness needs to be assessed by its potential to cause reputational damage to businesses or to mobilise consumers or investors to withdraw material support (Vasi and King, 2012). 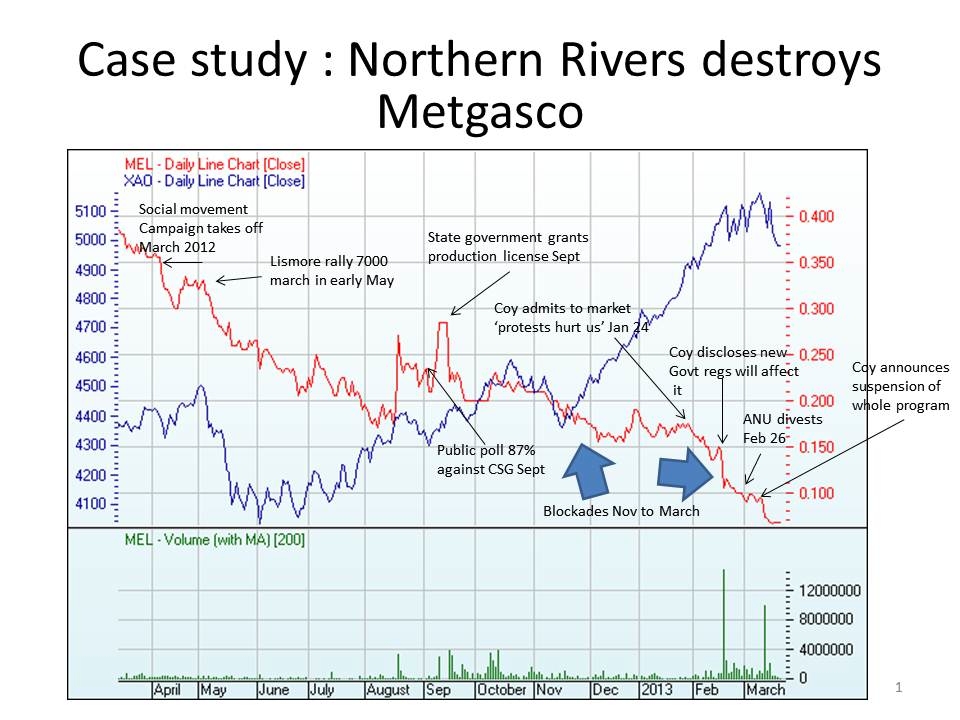 Daily price chart of Metgasco shares over 12 months contrasted to Australian All Ordinaries performance over the same period. Price movements mapped against significant social movement events during the same period.