Invasive Gasfields: The people vs Metgasco (Round 2)

On November 12, 2013 · Leave a Comment · In Commentary
So the new federal government is installed and the industry minister Ian Macfarlane has wasted no time proving his fealty to the mining industry. Like a knight kneeling before his King he submits himself to the service of the foreign mining companies who want to despoil our reef, drain and pollute our artesian basin and destroy our agricultural lands. Metgasco has awakened from its hibernation and the community is again being called upon to defend ourselves from invasion.

Before anyone becomes despondent let’s remember that this is round two and it was the people who won round one. That in itself was an incredible outcome, by January 2012 the industry looked unstoppable but through a massive mobilisation across the Northern Rivers the confidence of Metgasco and the state government were sufficiently shaken by March 2013 for Metgasco to close up shop (at least temporarily).

The definition of stupidity (or is it insanity) is doing the same thing again the same way and expecting a different outcome. So what is Ian Macfarlane and Metgasco doing differently this time around? Well almost nothing. It’s the same old play book where they fails to admit that this is a broad based movement representing the overwhelming majority of the region, the minister further insults the good people of the region with name calling, this time instead of ‘extremists’ its ‘anarchists’. Well we all know that anarchy is what totalitarians call real democracy. We the people call it democracy. It’s the right of the people of a community to have a voice in determining their collective future.

The people have spoken. 7000 marched against the gasfields invasion in Lismore last year, 85% of the Lismore local government area voted NO to the gasfield invasion in September. The industry has been spinning the lie that the people of Casino and the Richmond valley were in favour of the industry but independent polling conducted by researchers from Southern Cross Uni has now shown that 65% of the people of the Richmond valley LGA are opposed to the gasfield invasion compared to a mere 18% in favour. (http://scu.edu.au/environment-science-engineering/index.php/dds?cat_id=1688#cat1688)

We know from our gasfield free communities that community opposition to the gas invasion runs at 85-97% in Kyogle and Clarence and Ballina LGAs and even higher in Tweed and Byron.

Ours is a region united. So united in fact that both of our regions federal MPs from different sides of politics also oppose the gasfield invasion. Our Mps may be isolated in their party rooms but while ever they hold the faith to oppose gasfields lets welcome them standing with us. 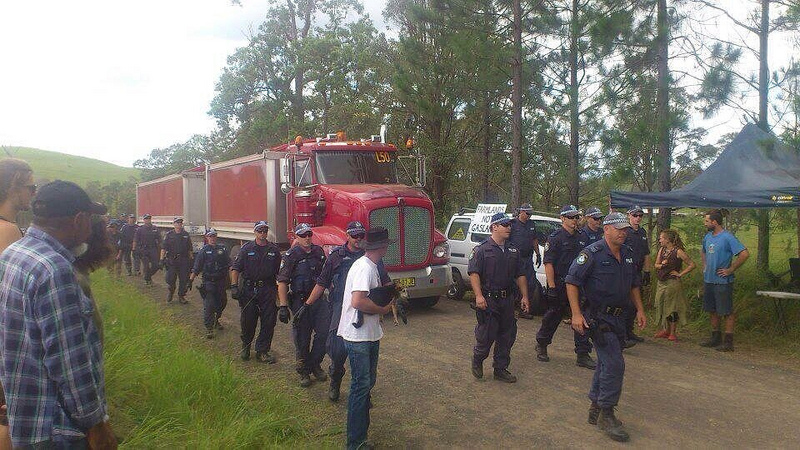 It begs the question, what is wrong with our democracy? We know the mining industry has a long track record of co-opting corrupt governments to use state force to impose unsustainable mining projects on unwilling communities in developing countries around the world. We have seen this in Bouganville, PNG, West Papua, we see it in central Africa and Nigeria, and we saw it in the dictatorships in Central and South America for decades. What is traumatising the good people of rural Australia is that we are seeing it now in Australia. We see the corruption in the way mining licences are handled in NSW and we see the use of force. We saw it first hand in Glenugie and Doubtful Creek, the sight of massive police escorts provided by the state government to impose gas mining on our communities by force. We will probabaly see it in coming weeks at the Pilliga and Gloucester (if you can go and support our friends in those places).

What a great job the region did holding our nerve and resisting non-violently. We have to remember that non-violence is the key to participatory democracy. If you think about it deeply enough you realise that violence itself is not democratic, it is the attempt to force your will on others. Our governments are not being democratic when they use the riot squad to force gas mining on us, but we are being democratic when we engage in non-violent resistance. In fact non-violent civil disobedience is the last frontier of democracy… Yes there’s elections but what if the mining companies have control of our parliaments? Yes we can lobby, visit our local members, make submissions, but what if the government and industry are going to ignore all that and go ahead regardless. The third and final layer of democracy is non-violent civil disobedience, that’s how the suffragettes gained the vote for women, that’s how trade unions gained rights for workers. It’s an age old tradition that actually works.

We have to remember the theory of change behind blockades, it’s not that each and every blockade will succeed in holding back the state force being exerted against us, it’s that in the moment of resistance we reveal the states bottom line, that it is prepared to impose this industry onto our population by force. We reveal the hypocracy of the power holders for all to see and as they are exposed they suffer political damage. They think they can overwhelm communities with force, but if communities persist the government finds itself caught in a politically and economically damaging cycle. The truth is that governments are vulnerable politically and corporations are vulnerable economically but communities, whilst we are vulnerable are also persistent, we are not going to go away.

If Metgasco wants to go into round two of a fight to the death with the people of the Northern Rivers we know exactly how much money they have left to fight that battle. They have 21 million dollars left and the reason they shut down was because it was dwindling rapidly and they were getting nowhere. Metgasco just doesn’t have the reserves left for a repeat of 2013 in 2014, but they are in a hard place and desperate. Beware the cornered tiger indeed, but this tiger is surrounded.

They are now placing all of their hopes on a plan to in drilling near Bentley. (Now there’s a good idea move even closer to Lismore !) They would like us to think its conventional gas but it’s not. Its tight sands gas and tight sands gas needs fracking, but enough of this wordsmithing about types of gas. It’s not the gas itself that will ruin our land, water, biodiversity and way of life, it’s the invasive industrial gasfields. This is why we have a gasfield free community movement. Let them use whatever words they want, it’s the gasfields that we will fight. And gasfields start with exploration, with seismic work with every step in the agenda to industrialise the Northern Rivers.

The mining industry has a word for democracy, they call it sovereign risk. The risk that the people will use their political sovereignty to stand up to mining companies. 85% of Australia’s mining industry is foreign owned, there is certainly a sovereignty element at stake here.

What the Ian Macfarlanes of this world don’t understand is that the people who feel most angry about this betrayal of democracy is the mainstream, even conservative people who believed in it the most. The radicals and lefties have always had their suspicions about corporate control of government, but the good folk in the middle had lived their lives mostly believing the official story of government and business. But we now live in a time where people’s family farms aren’t safe from this scourge, where people in QLD are suffering terrible health effects from gas mining and where whole industries like agriculture, wineries, horse breeding and tourism are being sacrificed for the sake of the fossil fuel industry making it last historic bid for survival in a changing world. The times are changing and the writing is on the wall for coal and gas and that is why they are in such a hurry to ram this agenda through. Resistance causes delay and delay will defeat them economically.

The gas industry would like us to believe that NSW faces a gas crisis and that prices will rise unless CSG miners are given untrammelled access to everyone’s farms and communities and bushland. Unfortunately for the Gas industry independent research and commentary by many economists and journalists comprehensively debunks the gas crisis myth. The truth is actually that the CSG industry itself is responsible for the coming price rises because they plan to sell the gas to overseas markets and expose the east coast gas market to world parity prices for the first time. No gas shortage (not even of much safer conventional gas), no good case to expand CSG production and no truth in their campaign.

The broad social movement of Australians fighting the gas rush and the coal explosion consist of people from all walks of life and political persuasions brought about by collective shock at the how our parliaments have been captured by the mining companies. Its not just about gas and coal anymore, it is the heart and soul of democracy that is at stake. On the bright side this is the largest most broadly based and fastest growing social movements in Australia’s history and through a smart combination of community mobilisation; political strategies; robust direct action and corporate campaigns it has shaken the confidence of government and the industry (despite outward appearances) and looks set to continue to do so.

One thing the industry knows is that if one region can resist and exclude the industry then it risks a serious domino effect as other communities are inspired, and learn from the processes and tactics that produce results. Already we are witnessing the rapid transmission and deployment of key elements of the Northern Rivers mobilisation and campaign framing processes in the battle against fracking in the UK at Balcombe, and we have already seen the Gasfield-free Community Strategy successfully deployed in the NSW Southern Highlands, and East Gippsland in Victoria.

In saving our own region we will have a ripple effect that empowers others.