High Noon in the Nthn Rivers: Metgasco Vs Everybody Else

On September 15, 2015 · Leave a Comment · In Commentary
It’s time for the NSW government to come to the fight. 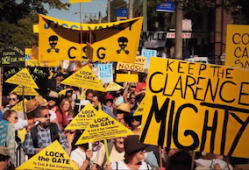 The showdown between coal seam gas company Metgasco and the New South Wales government is reaching its high noon moment.

Earlier this week Metgasco pulled out of negotiations with the state government, which had offered to buy back its gas licences across the Northern Rivers region of NSW and compensate it for the suspension its licence to drill the Rosella test well, in particular, near Bentley.

Metgasco’s attempts to drill the Rosella well spurred thousands of concerned locals to protest action last year, and after it considered sending 800 police in to facilitate the company’s plans, the state government decided instead to suspend Metgasco’s licence on the grounds of inadequate community consultation.

But in April this year the Supreme Court overturned the suspension, ruling that under the current legislative framework a lack of community consultation was not a valid reason for the suspension.

The win seems to have whet Metgasco’s appetite for litigation, and it’s now Metgasco vs. just about everybody as the friendless speculative driller threatens a new wave of litigation and a re-run of its infamous plan to drill the Bentley site. 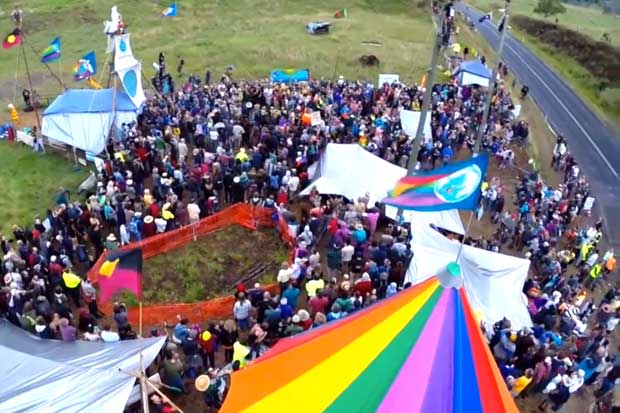 All of this was coupled with (another) petulant demand that the government kindly also supply the 800 or more police needed to install and protect a drill rig in the Northern Rivers.

The powerful social movement in the Northern Rivers is hardly quaking in fear, knowing full well that any form of escalation will only harm the government and the company further.

Metgasco’s media release may sound like a series of robust threats, but they represent the very last desperate shots left in the corporate locker. If their intention is to force the government’s hand they may end up getting a lot less than they have bargained for.

The company’s only remaining business model consists of mining under martial law or seeking pay-outs from the public purse. The tale of the fall and fall of Metgasco should become compulsory reading for all upcoming mining industry extractopaths, to teach them why social license actually matters.

But leaving the tragic audacity of Metgasco’s latest declaration of war aside, lets return to the heart of the problem: A weak and obsequious state government that is running out of bolt holes.

The prospect of a speculative miner threatening to use litigation to force a government to renew an expired exploration license is living proof of just how weak NSW mining and petroleum legislation is. The laws need to be changed.

The NSW parliament has the undeniable clear and unfettered constitutional power, and the democratic mandate, to cancel all of Metgascos’s licences with no issue of compensation arising, or for a predetermined sum.

It’s only the fear of upsetting the powerful and politically embedded mining lobby in NSW that holds the government back. The mining lobby and an emasculated Metgasco would be sure to cry “sovereign risk’ but that’s nothing more than the mining industry term for real democracy.The Baird government has been cowering in the corner, pretending its hands are tied by current legislation and playing victim to appalling displays of corporate bullying. The NSW gas plan is an abject failure.

Demonstrably, existing legislation places mining companies over and above the elected government. With the opposition parties, the cross benchers and the people of the Northern rivers all baying for legislative cancellation of Metgasco’s interests, the government has a very easy parachute available.

It is becoming increasingly difficult to understand the government’s refusal to consider a legislative response to the Metgasco situation.

The government knows that the Bentley gasfield can never go ahead. If Metgasco won’t go quietly the government has to choose between taking the legislative option now, or enduring waves of litigation, possibly massive payouts, and the prospect of another bout of civil disobedience on a landscape scale at Bentley, which would exact a massive political cost.

Yet the rest of the parliament waits with open arms to support any government move to cancel the Northern Rivers licenses. The ALP is set to re-introduce a Bill in coming weeks calling for cancellation of the Northern Rivers gas licences with finite compensation.

Metgasco has just managed to provide a more-than-compelling case for cancellation in the public interest, and the fact that cancellation would enjoy near unanimous parliamentary support would be historic in itself.

Time to choose, Premier Baird; the money or the box? Or more pointedly, cancellation or chaos.

Simply legislate to cancel all of the Northern Rivers licences with defined compensation. Job done, bye bye Metgasco: no drain on the taxpayers money, no mining under martial law.

This article was first published in New Matilda on 3 September, 2015.