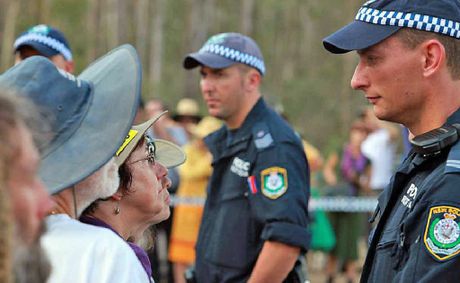 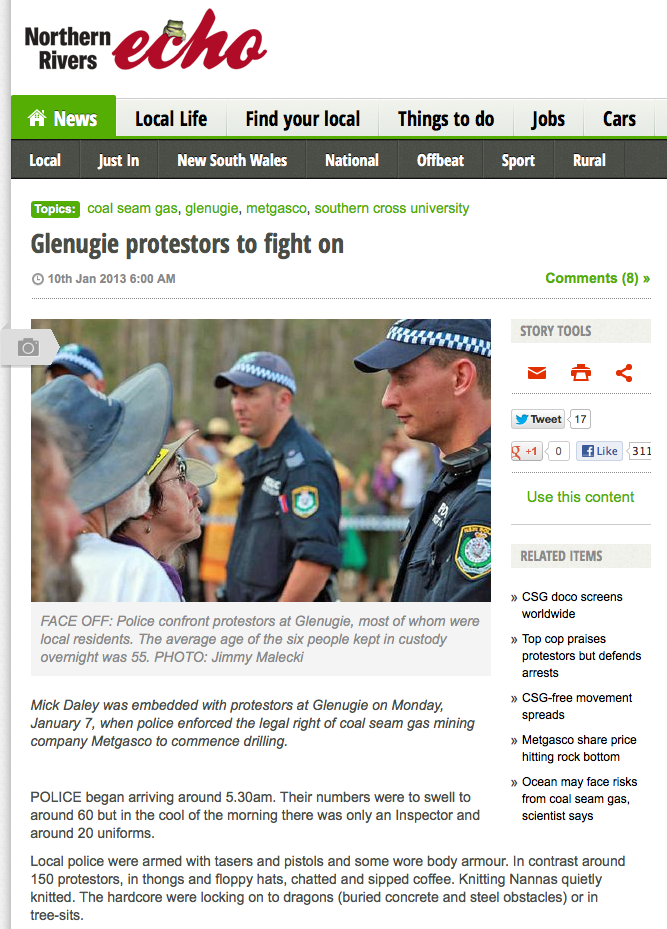 POLICE began arriving around 5.30am. Their numbers were to swell to around 60 but in the cool of the morning there was only an Inspector and around 20 uniforms.

Local police were armed with tasers and pistols and some wore body armour. In contrast around 150 protestors, in thongs and floppy hats, chatted and sipped coffee. Knitting Nannas quietly knitted. The hardcore were locking on to dragons (buried concrete and steel obstacles) or in tree-sits.

One sat atop a tripod of timber towering above the gate to the property, where a cement pad awaited a long-delayed Metgasco rig to commence drilling for coal seam gas.

The protest at Glenugie, 13 kilometres south of Grafton in the Coldstream wetlands had held out for 48 days, turning Metgasco trucks back twice and suffering only one arrest – that of local landholder Deb Whitley, in the process. The blockade was widely regarded as the front line in the campaign, spear- headed by the Lock The Gate organisation among others, to stop coal seam gas mining.

While most of the protestors on January 7 were locals, many had come from Lismore and Nimbin. The demographic was mostly mature-aged, and many had never been to a protest before.

Metgasco’s shares had twice plummeted to all-time lows of below 15 cents during the siege, as locals vowed to defy NSW Resources Minister Brad Hazzard’s ultimatum that CSG mining was coming whether people liked it or not.

The first arrest was at 8.07am, as Bob from Yamba was extracted and hustled away. Busloads of riot squad and tactical response police had arrived by then. Metgasco’s share price rose 3% to 17.5 cents by 10am, by which time 12 arrests had been made.

By midday there had been 18, as in a staggering display of force, police with a hired cherry picker and electric tools sledgehammered and cut out lock-on ‘bunnies’ and dragged away non-compliant protestors.

By midday, as temperatures soared in NSW’s record-breaking heatwave, the remaining protestors had been marched away and the Metgasco convoy began creeping in.

But resistance was not over. Activist Wanda Vaya Con Dios secured herself to a car in its path. It would be another hour before the drill rig was finally able to lumber through the gates.

By that time protestor’s numbers had risen to over 200. Facebook was abuzz with indignation and a growing realisation that the incredible flammable water-tap stories from the movie Gasland and the dreadful warnings of scientists and farmers from gasfields in Queensland with sick families and worthless properties, were in danger of becoming realities in the Northern Rivers.

By next day, the media had come alive with reports of these remarkable events.