Exporting a piece of Northern Rivers activism to the world. 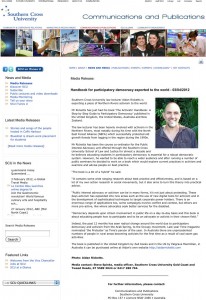 Mr Ricketts has just had his book ‘The Activists’ Handbook: A Step by Step Guide to Participatory Democracy’ published in the United Kingdom, the United States, Australia and New Zealand.

The law lecturer has been heavily involved with activism in the Northern Rivers, most notably during his time with the North East Forest Alliance (NEFA) which successfully protected old growth forests from logging in the region during the 1990s.

Mr Ricketts has been the course co-ordinator for the Public Interest Advocacy unit offered through the Southern Cross University School of Law and Justice for almost a decade and he believes educating students in participatory democracy is essential for a robust democratic system. However, he wanted to be able to reach a wider audience and after running a number of public seminars he decided to work on a book which would explore current practices in activism and examine and advise people on best practice.

“The book is a bit of a hybrid” he said.

“It contains some wide ranging research about best practice and effectiveness, and is based on a lot of my own action research in social movements, but it also aims to turn this theory into practical advice.

“Public interest advocacy or activism can be in many forms, it’s not just about protesting. These days activism has expanded into new areas such as the use of new digital tools for activism and in the development of sophisticated techniques to target corporate power holders. There is an enormous range of applications too, some campaigns involve conflict and contest, but others are more pro-active, like where advocates seek better services for the disabled.

“Democracy depends upon citizen involvement in public life on a day-to-day basis and this book is about educating people how to participate and to be an advocate or activist in their chosen field.”

Indeed, the past 12 months has seen radical change around the world due to participatory democracy and activism from the Arab Spring, to the Occupy movement. Last year Time magazine nominated ‘the Protester’ as Time’s person of the year. In Australia there are unprecedented numbers of people in rural areas becoming activists for the first time as a result of coal seam gas activities.

The book is published in the United Kingdom by Zed books and in the US by Palgrave Macmillan, in Australia it can be purchased online at Aidan’s own website https://aidanricketts.com