Elections as far as the eye can see

Brace yourself for a lot of elections in 2018/9. Apart from a looming federal poll this year, we are expecting elections in Victoria, South Australia and Tasmania, and the NSW state election will be March 2019, but because it has a fixed date, the campaign starts nearly a year out.

Elections are only a part of democracy, of greater importance is our 365 day of the year determination to stay informed and work with our communities to speak truth to power and push hard to make the world a better place in countless ways. However, elections are an important because parliaments are where laws are made, and some of campaigns really rely on legislative change to succeed. The power of the two major parties and the corrosive impact of corporate donations has certainly made a lot of us very cynical about the electoral process. But we still need to make smart choices.

There remain significant differences even between the major parties. Every new term of an LNP government is another harrowing episode of neo-liberal extremism where we endure more hollowing out of basic services and fairness in our society. Labor governments are reliably less aggressive in social and economic policy, and have proven themselves to be better macro economic managers in the past thirty years than the ideologically driven LNP.

But if we really seek social justice, environmental sustainability and a genuine effort to tackle corporate corruption in politics we need to look past the big major parties and hope that the Greens get a chance to advance their legislative agenda on things like a federal ICAC and reform of the shifty world of political donations.

The very best way to hold the major parties to account is to make them reliant on minor parties to form government, a hung parliament. The Gillard government relied on minor parties and independents in both houses of parliament, yet was one of the most legislatively successful governments of recent decades.  It isn’t easy breaking the two party system. The Democrats failed and the Greens after thirty years are finally making headway in winning lower house seats. The maths of the voting system specifically supports a two party system, emerging parties need to fight not only the politics but even the maths.

Once minor parties take enough lower house seats to force the government into minority status they can then really start to exert some pressure on the government of the day. In a close election, this may mean that as few as three or four seats going to a minor party can give them balance of power. Federally the Greens may get there in 2018 if they can take some more inner city seats in Melbourne and Sydney, but it is an uphill struggle. 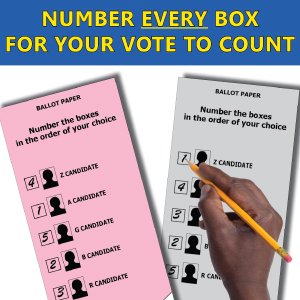 In the NSW state election, the major parties are even further advantaged by the fact that preferencing is not compulsory, and so many voters simply waste their preference power by failing to fill in every square. This simply advantages the big parties. The Greens would likely have won both Lismore as well as Ballina last state election if voters had followed the advice to ‘number every square”. David can beat Goliath but it’s a major push to do so.

Wrestling a seat off the majors brings advantages locally. Again, (somewhat cynically) the majors tell you that you need your local member to be from a major party so they can have access to the money controlled by the government. That’s virtually admitting to the practice of pork barrelling, (using public funds to reward voting patterns). In reality however, once your local electorate displaces the old parties your local area gets a lot of extra attention and becomes hotly contested in future elections. If it actually forms part of a balance of power bloc after the election, then your local area has very substantial political power.

That’s a short summary of the maths, the politics and the reality of breaking the political duopoly. We all know the duopoly isn’t working for us, but we need to change our voting habits to change the system

Enjoy the spectacle this year, and when you tell the election booth workers that you know what you are doing when you vote, I sincerely hope you do, as many people have a very poor understanding of how our electoral systems work.