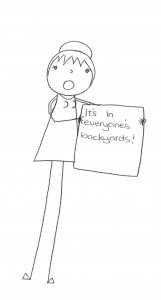 To support the community action against coal seam gas mining in the Northern Rivers region, there will be activist workshops at the Workers Club in Lismore at 6.30pm, every second Thursday for three weeks from March 15th.

UPDATE: Following on from the March 15th training workshop, about 200 people protested outside the office of Nationals MP, Thomas George on March 16th. Crowd protests outside MP’s office Northern Star