The corporatisation of democracy 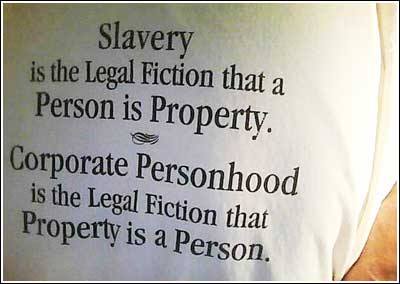 Barely a day goes by without yet another example of corruption of the political process by big mining and development companies. The situation is probably just as bad in other states and federally but there’s no Federal ICAC to blow the whistle. We are supposed to trust Premier Baird’s assurances that he wants to clean up the state then he turns around and proposes to give corporations the vote in council elections.

This is undoubtedly one of the worst and most anti-democratic proposals anyone could come up with. Our Constitution clearly envisages a system in which the government is chosen by the people (s 24) so fortunately such a plan would be unconstitutional if proposed at the Federal level. Unfortunately local government, despite being the level of government closest to the people is not formally recognised as a constitutional layer of government in Australia, and as a result its voting system and processes can be changed at the whim of the state government.

Corporations represent a significant challenge to democracy because the size and power of many corporations dwarfs that of the governments they deal with. They enjoy most of the rights of real individuals under the law except until recently the right to vote in elections. Corporations serve a particular function in the business world but they must not be allowed to take over our electoral system. The idea of giving them the vote is alarming. It is not just a system that could be rorted; the idea itself is a rort.

Unlike people, corporations can be created at the stroke of a pen, in fact hundreds of them can occupy a single lawyer’s filing cabinet as what is called ‘shelf corporations’ literally on-paper companies that you can come in and buy off the shelf.

To quote  David Korten author of the appropriately titled book, When Corporations Rule The Earth “People even the greediest and most ruthless among us, are living beings with needs and values beyond money… our bodies are flesh and blood runs through our veins…Behind its carefully crafted public relations image and the many fine and ethical people it may employ, the body of a corporation is its corporate charter, … and money is its blood. It is at core an alien entity with one goal: to reproduce money to nourish and replicate itself. Individuals are dispensable. It owes only one true allegiance; to financial markets.”

The Baird government’s proposal to allow corporations to vote in local government elections, could give every corporate landlord and every corporate tenant two votes in local council elections. The government is proposing it for Sydney but openly courting the idea of rolling it out across NSW.

Such a move would be akin to re-introducing a property ownership franchise to voting, it would edge out real democracy and real people and undermine the very basis of government by the people. To give an idea of what happens, The City of Melbourne already has this crooked system and at its last council election 60% of the votes cast were from non-resident corporations and land owners. This even included foreign citizens who voted from overseas.

A city office block can be the head office of literally hundreds of corporations, any one of them that was a tenant of any office could potentially have not just one but two votes. Instead of fighting corporate corruption of democracy, this proposal threatens to institutionalise and normalise it.

Is it not just left leaning commentators who can see the risk of corporate control of democracy, some of the world’s most respected judges are concerned about corporate control of government too. In the US case of First National Bank v Bellotti, US Supreme Court Justice White had this to say “It has long been recognized that the special status of corporations has placed them in a position to control vast amounts of economic power which may, if not regulated, dominate not only the economy but also the very heart of our democracy, the electoral process… The State need not permit its own creation to destroy it.”[1]

And in our own High Court of Australia in the case of Caltex v EPA, Justices Mason and  Toohey observed “In general, a corporation is usually in a stronger position vis-à-vis the state than is an individual; the resources which companies possess and the advantages which they tend to enjoy, many stemming from incorporation, are much greater than those possessed and enjoyed by natural persons…”.[2]

Your local state members are part of the government that is proposing this outrageous reform, make sure you let them know your feelings about this.

Anyone wanting to know more about the global struggle for citizen democracy should visit the website of POCLAD (Program On Corporations Law And Democracy) www.poclad.org/

One Response to The corporatisation of democracy