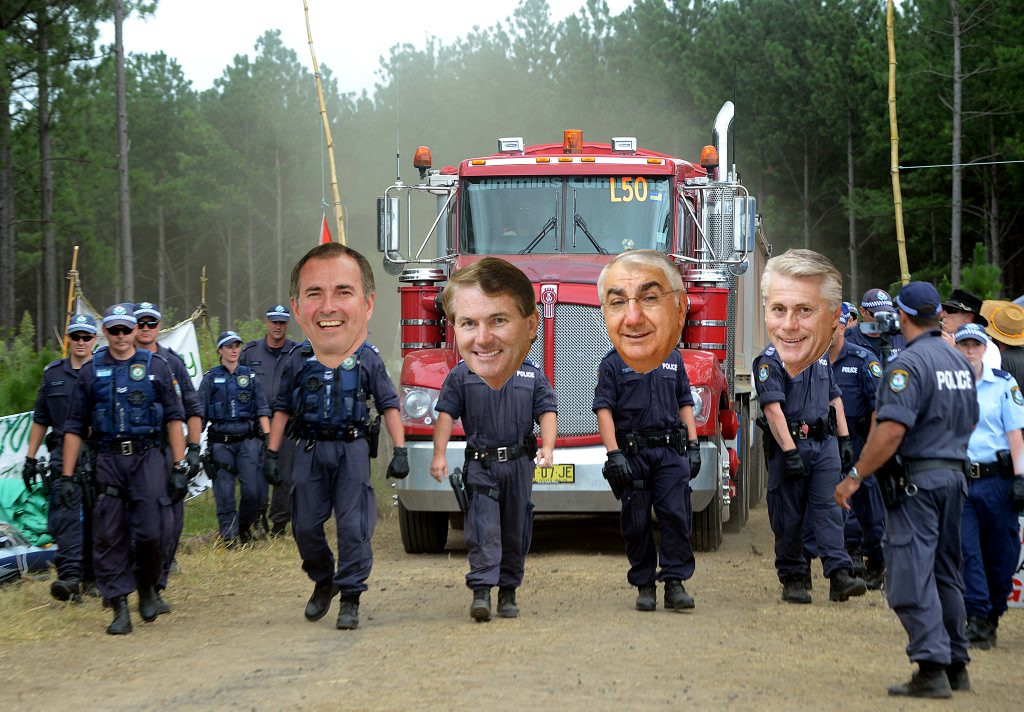 What an inspiring beacon of local democracy the Bentley blockade has turned out to be.

Like any conflict there is the immediate issues and then there are the wider ramifications. What appears on the surface to be simply a dispute about a speculative gas explorer gaining access to a drilling site is rapidly turning into a grand experiment in the power of local democracy to resist the seemingly overwhelming combination of state and corporate power.

Across NSW now there are numerous battles to resist the relentless imposition of both coal and gas mining against the will of regional communities. Our expectation has always been that governments act on behalf of the people and to a lesser extent that businesses seek to operate with at least a significant degree of community support (social license). People are not against all mining, nor are they against gas itself but what really has provoked a response across the state is the growing spectre of the corruption of our system of government by vested interests. It has become clear that both the past and present NSW governments are deeply compromised and captured by industrial sectors that they are supposed to be regulating.

Democracy in NSW is clearly in a deep crisis, and the ongoing revelations from ICAC are likely to be only the tip of the iceberg. The immediate consequences of a corrupted political system is poor decision making and there’s plenty of that on display, but the deeper corrosive effect is the emergence of a political system in which the power of the state and the power of vested interests become illegitimately merged. In short we are in a situation where state power is being used as a vehicle for vested interests.

We know locally that people have already exhausted the traditionally conservative forms of democratic participation, we have marched, signed petitions in our tens of thousands, written and spoken to our state MPs and even voted 87% against the establishment of a gasfields industry, tell me what reasonable option was left to the people of the Northern Rivers than to resort to non-violent protest to resist this invasion.

I wrote in my last column of my pride in our local community that despite the conflict that our people, our local police command and the Richmond Valley Council (RVC) could at least reach consensus on the over-arching importance of public safety and the right to protest. Whilst the local police command and the Bentley protectors have maintained that position, the RVC appears to have walked away from that very important consensus on matters that should be above politics and self interest.

The attempts by the RVC to discourage our right to protest even on private property with the owner’s permission unfortunately pale in comparison to the approach of our state government.

Reliable intelligence now reveals that the state government is raising a force of police up to 700 strong from around the state (ie outside our local command) to come to Bentley to deal with the very large outbreak of democracy that is occurring. The audacity of a government embattled by internal corruption to send such a military type force against a united regional population is staggering. Staggering not only for its audacity but also for the economic and social cost and its obvious pointlessness. Mining under martial law is not a solution to an outbreak of democracy on this scale.

It is time for the NSW government to step back, stand down its riot police, constrain Metgasco and engage in genuine consultation with the people of the Northern Rivers.

We value our community, our land and water, we value our relationship with our local police and we are reasonable people. But brute force will never shift the very real social consensus that exists against invasive industrial gasfield development here and there is a need in the public interest to negotiate a genuine political solution. The question remains where are our four regional state MPs at a time like this, are they with us looking for a solution (as our mayors and federal members are) or are they marching ahead of the riot police and drill rigs?