Activism Leader: Bentley Blockade will go down in history

WITH the departure of Metgasco from the region, the Bentley blockade will assume a permanent place in the history books, according to activism academic and gasfields free organiser Aidan Ricketts. 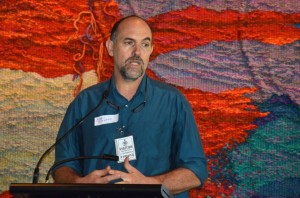 Mr Ricketts, who is writing his PhD on the gasfields free movement said the now famous blockade had achieved several “firsts” in protest history.

One was the fact a state government fully prepared to send 800 police to the region and then backed down – before breaking the blockade.

“It’s usually a point of honour that they will breach the protest and then back down.”

Bentley was also unprecedented because unlike the famous Franklin dam blockade in Tasmania and the Daintree in Far North Queensland, it wasn’t led by a small group of hardened protesters but a “whole region”. That was crucial.

Because of this, basic planning tasks like catering, setting up a temporary headquarters (in the Bentley RFS shed), and finding accommodation proved an obstacle for NSW Police.

“They’re all things that showed the entire community just wasn’t onside – I don’t think we’ve ever seen that before in Australia,” Mr Ricketts said.

“(The opposition) was mainstream, supported by local government, and was big and getting bigger.

“It was like bringing the Americans into Vietnam. It was going to be a quagmire.”

Due to the huge community support, freedom of information-obtained government documents had ranked the Bentley blockade as having a “catastrophic” litigation risk.

But there’s also no doubt the 2015 State Government election results for the North Coast Nationals showed a perilous future if the government continued to back the industry.

Lismore MP Thomas George came within a whisker of losing his seat, despite promising a whopping $180 million to finish the upgrade of Lismore Base Hospital

Inside the National Party, there was “impossible pressure” on the North Coast Nationals with the loss of a seat in Ballina an internal split within the rank-and-file membership emerging.

“I am at heart a democrat and I believe that when a community speaks as loudly as the Northern Rivers have on CSG, it is incumbent on their representatives to act,” he said.